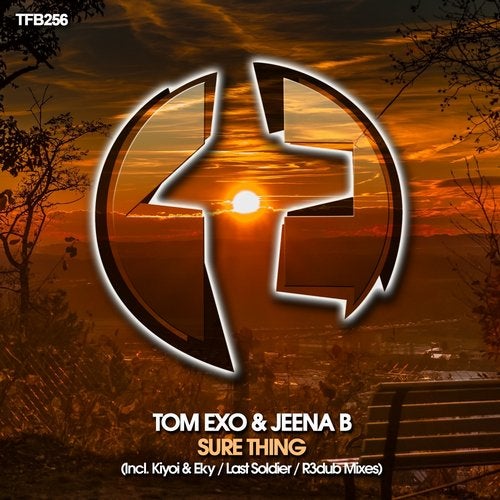 TFB Records proudly presents its release 256th with a great compilation of tracks. The main song is the one produced by Tom Exo & Jeena B, 'Sure Thing', but this release also brings a 'Radio edit' of the original and three different remixes signed by some of the best producers out there, Kiyoi & Eky, Last Soldier and R3dub, also including each of them its 'Dub Mix'. So we are bringing to you eight tunes on this release!

The original mix (Extended) brings a delightful vocal uplifting sound with a notorious energy within its bassline. The beautiful voice of Jeena B is soon added into the mix and, with its impressive vaporous shape, it stands out on top of the song, leading the initial progression. During the breakdown, this voice shows its most subtle version and its most beautiful notes. Supported by a magical atmosphere, the breakdown will arise our best dreams. At the end, and with a short uplift, the song falls into its main part, which is better to experience by each one to fully get all its positive energy! We are simple stunned by this marvel by Tom Exo & Jeena B.

In alphabetical order, we first find the remix signed by Kiyoi & Eky, the stunnig duo that is blinding the world with their seamless skill. Following with their demonstration, they present a completely banging uplifting tune, where the bassline delivers tons of power and the vocal is perfectly integrated into this energy rush. During the breakdown, the voice reaches its full version, and freely shines over the subtle ambience created beneath, a real piece of art you will fully enjoy. After this breakdown, and with a surprising ease, a short uplift is build up and a huge tension is rised to finally explode and reveal the main part of this gem! If you are following Kiyoi & Eky, you just can not let this song passes by.

Next remix we find is the one brought by Last Soldier, who has bet for a lighter sound, giving a higher presence to the voice since the first steps of his remix. Using brightfull notes on top of the bassline helps on creating a completely magical ambience in which the vaporous voice of Jeena B shines with a gorgeous power. Once we fall into the breakdown, an ultra soft atmosphere will surround us and, together with the subtle voice, will take us into a long journey through the hidden world of wonders. To keep the journey on, when the climax is reached, a rush of beauty joins the mix to enhance even more the overall performance. Unbeatable magical tune by Last Soldier!

The name we find into the last remix is the one and distinctive, R3dub. The man who doesn't need a presentation brings to us a remix filled with many different sounds, a song where the voice is above perfection when talking about combination with the bassline, an unprecedent level of quality we just can praise. With the expected powerfull bassline from R3dub, what most stads out into this song is the massive rise of tension at the end of the breakdonw, an untold gathering of powerfull bass and acidness from the rest of the synths. A different point of view brought by R3dub, who never disappoints with his productions. Out from casual Uplifting, this song will flood your best expectations since the very beginning!