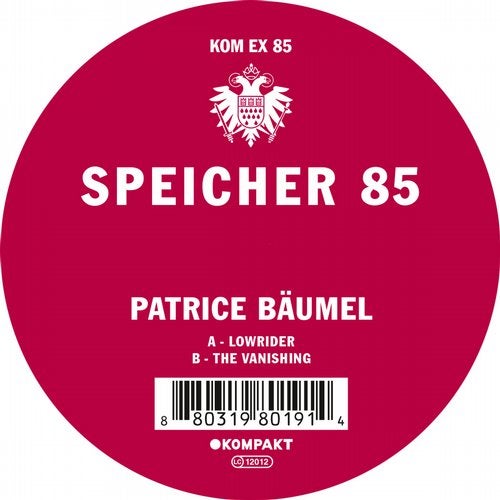 Starting out in 2001 to tie up some loose ends from our regulars, SPEICHER has since become a guarantee for vanguard dance sounds from all over the planet, allowing KOMPAKT to invite and support electronic artists that comfortably inhabit both the delicate and the more deliberate ends of the electronic music spectrum. For SPEICHER 85, Amsterdam-bred floor charmer and producing mastermind PATRICE BÄUMEL presents two highly effective techno bangers that will become the weapon of choice for any discerning DJ looking for momentum. Color-coded in juicy red, SPEICHER 85 features smoldering new material from none other than PATRICE BÄUMEL, one of the most revered resident DJs and techno innovators from Amsterdam's iconic, but sadly defunct Trouw club. Starting out in the mid-noughties, he has earned his production stripes on labels as diverse as Trapez, Get Physical or Systematic, with his latest highlights being last year's stellar remix for GusGus' OBNOXIOUSLY SEXUAL (KOMPAKT DIGITAL 044) and the label solo debut on SPEICHER 81 (KOMPAKT EXTRA 81), a raw and energetic offering that turned out to be a mind-bender carving out its very own definition of a hookline. A relentless sonic adventurer in both studio and club trenches, Patrice knows his peak time by heart, having developed quite the understanding of the fluctuations of the crowd before him. You can hear that straightaway with a-side cut LOWRIDER, a clattering minimalist groover with maximum impact, vetting helplessly stuck floors with a surge of adrenalin-fuelled percussion and the occasional synth roar. The b-side's THE VANISHING presents itself as an equally hypnotic affair, albeit with a different angle - this time, we find a true melodic meltdown monster whose epic vocal break will leave no roof or hand unraised. With records like these, we've got no worries about the sheer, animalistic power of techno.