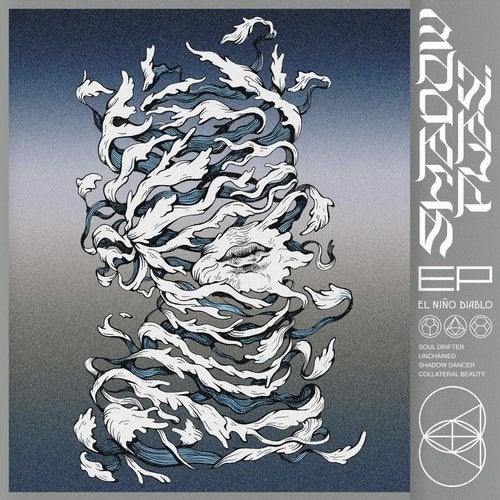 Inaugurating his eponymous record label elninodiablomusic, here comes el nino diablos maiden solo effort, ShadowPlay. The EP was recorded at Berlin's iconic Funkhaus studios in the winter of 2019 and features an original art cover courtesy of Danish designer Tobias Jacobsen. The music video for Shadow Dancer was directed by Adam Munnings (www.adammunnings.com). If each cut opens a distinct portal to a well-defined headspace, the opening slab Soul Drifter eases us into a slo-evolving hall of mirror where brittle attunement meets cottony curviness. Sitting at the junction where vaporous oneirism pervades into day-to-day trivia, the track bristles with swarms of sub-bass arpeggios, bringing together a steady cruising polyphony of stealth melodies, processed riffs and sharp-edged chimes to shape something of an otherworldly meditative joint. Drawing its inspiration from the struggle and rise of the feminine, the darker minded Unchained follows up with restrained, contradictory power. Draped in muted tones and featuring FX-drenched percussive elements directly derived from field recordings made at the Funkhaus, it folds and unfolds repeatedly; blending in the mangled suavity of distorted choirs with tape-echod strings and sluggish drumwork to weave an intricate tale on duality and the nature of change. Starting off as a dubby deep-diver of the purest ilk, Shadow Dancer soon mutates into a steadfast industrial churner, but laced with wonkier downtempo sequences throughout. Merging sonic recordings obtained by experimenting with snow alongside elements of his go-to synth companion, the mighty ARP Odyssey, this ambivalent acid-dipped roller takes us on a dynamic ride, moving from heavy-duty peak time pound to off-kilter ambient digressions in a jiffy. Rounding off the package, final deus-ex-machina Collateral Beauty plunges its listener in a state of enhanced empathy for his/her surroundings. Navigating the confines betwixt kosmische-laced escapism and grounding 4x4 patterns through emotional tides of a raw, unadulterated pulse and soaring synth tapestries, the otherworldly closer has us levitating in symbiotic balance between peace of the mind and serene physicality - adjusting our faulty sensors to soothing new projection horizons