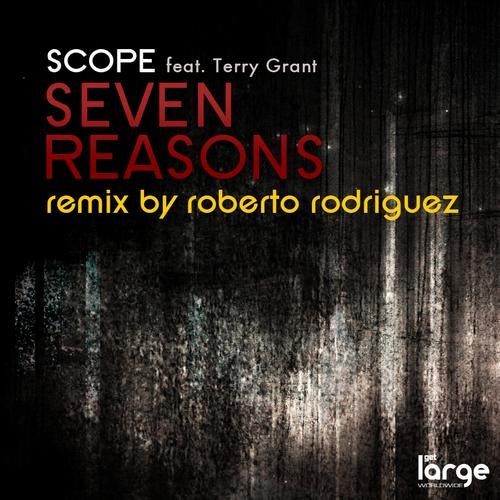 DJ Support from: Luke Solomon, Pol_On, Lovebirds, Quentin Harris, Pete Herbert, Alex Niggemann, Craig Smith (6th Borough Project), Alain Ho, Phil Dairmont, Ewan Pearson and more. Belfast based Ric McClelland AKA Scope is one of the most respected artists to come out of Ireland in recent years. Releasing for labels such as Urbantorque, Plastic City and of course Large music, he has built an enviable following with his own unique take on house music. Alongside his own productions he has established himself as a trusted remixer, reworking music for the likes of Tom Middleton, Milton Jackson & Behrouz and away from the studio has a busy Dj schedule which sees him play around the world. 2012 is to see the release of Scopes latest album, Seven Reasons and as part of the build up Large Music is releasing the superb title track as a single featuring 2 superb remixes from Roberto Rodriguez. The single kicks off with the original vocal version of Seven Reasons, a wonderfully deep and melodic acid fuelled house cuts that showcases Rics crisp production skills and the superbly soulful vocals of the wonderful Terry Grant. For the vocal adverse there is a stripped dub mix where the acid lines and warm pads take center stage providing a superb dancefloor alternative. For the remixes Ric and Large Music have enlisted the considerable talents of Roberto Rodriquez, a producer who has delivered the goods time and again with his outstanding releases for labels such as Freerange, Compost and Delusions of Grandeur. Roberto presents two remixes of Seven Reasons, the first a superb epic vocal version that distorts the acid lines and delivers a spacious and mesmerizing atmosphere, the second, a truly deep and wonderfully infectious piano dub. This is another sterling release from Scope and a taster sample of what is come on his forthcoming album. Seven Reasons is released on Large Music in December 2011.