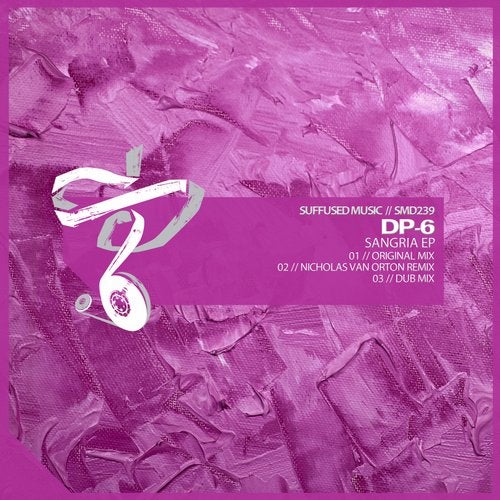 Comprising the combined Russian forces of Alexi Filin and Vadim Indigo, DP-6 have been at the vanguard of the underground house scene for two decades. Regulars on Suffused Music, it is an honour to welcome them back to the label with a brand-new track in "Sangria" and a world-class remix from an Argentinean icon.

With almost 500 production credits to their name across a plethora of blue-chip labels dating back to mid-2005, DP-6 have seen no let-up in their ability to craft high quality underground dance music. Inspiring fans across their Russian homeland with spell-binding DJ sets to captivated audiences, the duo have used the opportunity to play out an array of their own unique production material. As such, Clinique, Superordinate Music and Naked Lunch have all played host to the DP-6 name with a further 300 credits featuring on their own DP-6 Records. January 2016's "Eclipse" saw a debut on Suffused Music, while the twin-track "Synesthesia" in May that year went on to see a number of rereleases with remixes from the likes of Espen and Matteo Monero.

Now returning, "Sangria" is a typically deep affair that bristles with rapid-fire percussive hats and deep bass before a sumptuous grooved chord adds head-shaking energy. Building with ease, an almost imperceptible inclusion of additional production elements across the near 7-minute piece, has created a hypnotic and vibrant track. Also included, a stripped back "Dub Mix" provides an even deeper affair, revelling in cavernous bassline, 808 percussion and muted melodic phrasing.

Nicholas Van Orton needs little introduction to the dance music cognoscenti. An artist with over 15 years experience of the underground industry, Van Orton has risen through the ranks of the Argentinian production fraternity. DJ performances across the cosmopolitan Buenos Aries capital have kept him engaged with a faithful and adoring fan base, while production work has seen him reach some 600 credits with a raft of music signed to Perfecto Records, Superordinate Music and over 250 appearances on the Balkan Connection family of labels. Moreover, a double century of those have featured on the South America variant which has thrived under his stewardship.

A single remix of Munbraze's "Peractorum" in October 2017 represents Nicholas Van Orton's debut outing for Suffused Music as he returns once again to the label to take on DP-6 with suitable aplomb. Using the deep house credentials of the original to maximum effect, a huge offbeat percussive pattern combines with rich rolling groove to create a subtle new variation of "Sangria" that revels in a dynamic new dancefloor urgency. Using the original components to impressive effect, a new open-filtered repetitive note adds energy to the jam-packed groove, while a host of new production material and subtle melodic flourishes creates a masterclass of production prowess from the Nicholas Van Orton production studio.