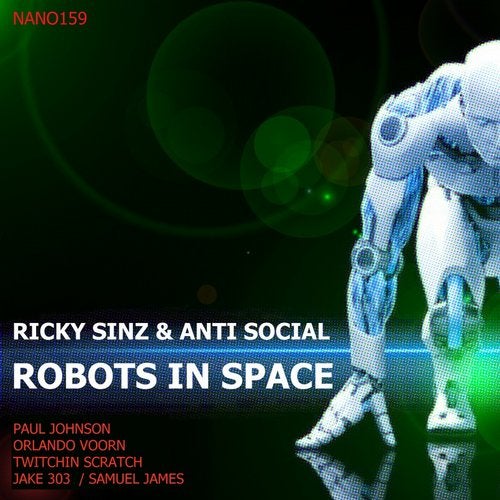 Robots in Space is the dystopian outlook of Chicago's Ricky Sinz and features collaborative work with some heavy hitters and new kids on the block. Paul Johnson, Orlando Voorn, Twitchin Scratch, Jake 303 and UK's Samuel James all drop their own versions to make this a very DJ Friendly pack of club grooves.

Ricky Sinz is a true creative, modern guy. An actor, a former soldier turned techno producer and DJ from Chicago, Illinois, Ricky just loves to bang the shit out of it. After DJing across the Atlantic Ricky released music on Nice & nasty's sister label, Dublin Xpress and since then has gone on to create his own imprints, Sin Factory Records and Nacht Music.

At the age of fifteen years, Sinz began working as an afterhours DJ, finding a passion for house music. He began his music career around the same time that Chicago house music found its forefront in the world of dance music. He eventually became known as one of the maintstays of that sound and rode the exploding midwest rave scene.

Following the beginning of his DJ career, he became one of the only DJs known to utilize four-deck mixing to essentially remix live on stage at that time. Sinz has performed at clubs such as Panorama, Berghain, Ministry of Sound, Tresor, Egg, Pacha and Heaven.

Robots in Space is a first of many collaborations, this time with Margo Cortright aka Anti Social - Artist, DJ and Promoter from the Chicago underground and the tune epitomises the big bumping jackin sound of the windy city whilst the remixes will blow up many a dancefloor around the globe.

Nice & Nasty are delighted to be part of this project and welcome back Orlando Voorn to the fold whilst inviting Twitchin Scratch, Jake 303 and the the legendary Paul Johnson to the family for their first time.