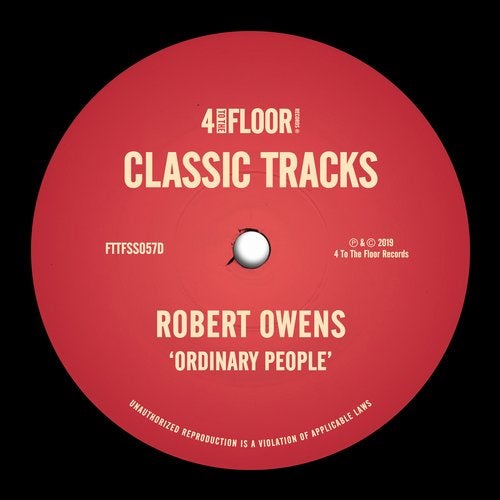 Robert Owens, one of the names closest associated with the golden era of classic Chicago house, has been involved with some of the greatest records of the period, such as his solo 'I'll Be Your Friend' and featuring on Frankie Knuckles and Satoshi Tomiie's 'Tears'. Now his mid-nineties white label classic 'Ordinary People' has been re-mastered and re-packaged to for 2019 dancefloors digitally. Featuring the original mix as well as DJ tools like the Accapella and Dub, the package also includes remixes from Pete Heller and Terry Farley under their Fire Island alias, plus legendary DJ Booker T who delivers with his Dub and Spiritual Mix. This diverse package is a true celebration of classic house, with 4 To The Floor collating all the unique productions that stemmed from it into one convenient package.