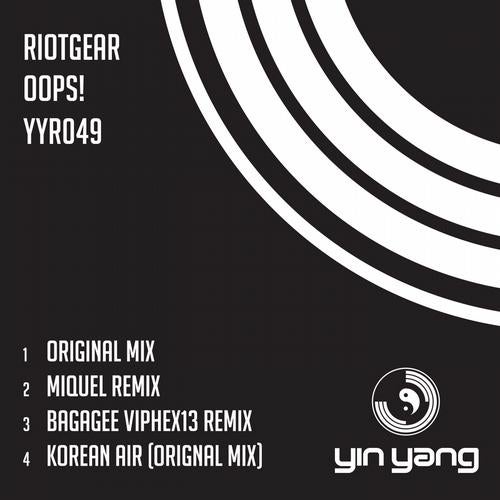 If you summed up RioTGeaR's style in one word it would be this: Diverse. A passion for deep moving electronic music mixed with the necessity of developing a big room sound has molded their approach to building dance floor energy. With a prominent tribal flavor, their sets weave both uplifting and dark elements together, creating the trademark sound that they have become known for. Releases on Yin Yang, 1605, Dim Mak, Toolroom, Hotfingers, Blu Music, Gate Null, Aco Tech, MB Elektronics, Phunk Traxx, The End Recordings and more to come... The original is a killer track by USA's RioTGeaR and one of their best tracks to date, it has a haunting melodic synth line that layers over the drums that hypnotises you, it's quirky sounds run seamlessly between the groove and the melody and that bassline is tight and rolling. It's a gigantic large king-size portion of modern techno. Remixes come in 2 flavours.. First up we have Yin Yang's very own Miquel that takes the original and beef's it up giving it that 'European Czech' feel, very much in the style that Miquel is getting a great name for. Dark and haunting but still keeps the original's hypnotic qualities. Fantastic. Next on the remix is Korea's big up and coming producer Bagagee Viphex13. Bagagee takes the qualities of the original and makes it more of his own style adding key changes to that rolling bassline and adding in a much bigger breakdown and build up. Another great remix addition. And to complete this release is another great original track by RioTGeaR themselves named Korean Air. A great quirky tech number that is blurring the lines between tech house and techno. Another trademark sound for RiotGeaR with them quirky sounds and rolling bassline. Sexy as hell.