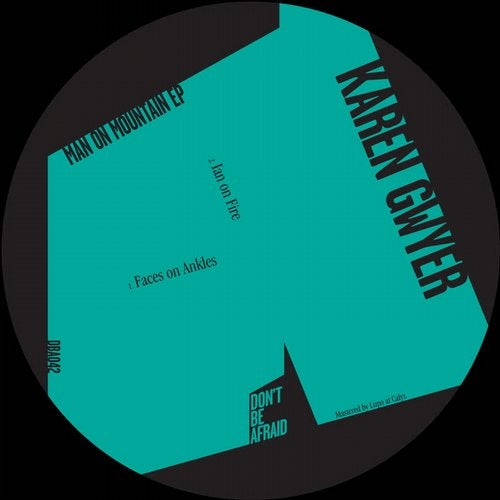 Karen Gwyer returns to Don't Be Afraid with her first new work since 2017's Rembo LP, which gained critical acclaim for its powerful body music and melancholic melody led pieces. Man On Mountain EP is a further evolvement of the duality and nuances in moods and emotions that make Gwyer's music so impactful. Resetting, rebuilding and subverting atmospheres and rhythms is a constant in her music and Gwyer builds on that more in this latest instalment.
The low swung weight of opener Faces On Ankles' bassline is full of suspense, alternating between rolling fluidity and unpredictable kick patterns, while a dubby melody dances alongside glossy, introspective arpeggios. The EP then weaves suddenly into cosmic drone that snarls with tension and desolation on Ian On Fire. You can sense contrasts between these two musical spaces - luscious, bouncing techno that nods directly to Gwyer's Midwest upbringing (Faces on Ankles, Cherries On Shoulders) and darker drone experiments where light peeks through the composition that adds balance to the mood, (Ian On Fire, Ribbon on Neck). Gwyer's music takes a different path with each record while holding onto elements of previous incarnations of her sound and Man On Mountain adds new dimensions to the bold and open minded spirit she embodies.