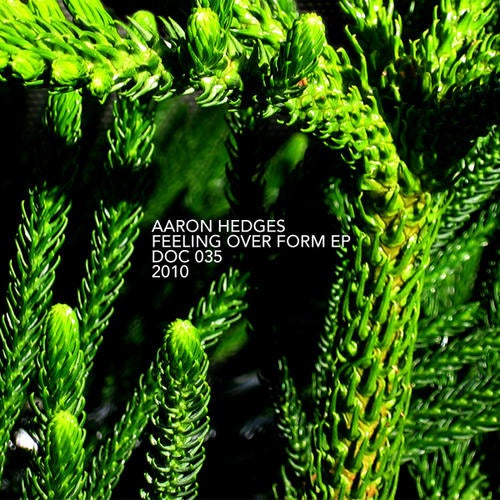 The Feeling over Form EP is DoC label boss, Aaron Hedges, return to original production. Aaron has been keeping busy with organizing DoC events at Berlins most notorious late night destinations, such as Bar 25 and Arena Club. He also has maintained a late night monthly residency at the Gegenkulture party's at Golden Gate club. Mr. Hedges has lately been performing a newly developed live show with the sultry vocalist Mz Sunday Luv. Besides a number of forthcoming studio collaborations with Sunday, Aaron has been working with Mama, who has just recently finished touring with the side project of the singer Kele from Block Party and worked with Posh the Prince who has been traveling the world performing backup vocals and dancing with Lady Gaga. Sometimes the world is just too small!

Dissociative Fugue is a dark, sexy, and synthesizer driven tech house stormer. It builds slowly with oddly cut and reprocessed percussive loops. It slowly morphs into a pumping latin influence track until continuing to evolve into a beautiful, melodic rave break down. Similar to its name, it may cause another you to come out of the shell. Maybe next morning you will wake up knowing how to play the piano or speak Russian.

Ghostbahnhof is a charming yin to the a side. Ghostbahnhof is a beautiful, Detroit techno meets italo-disco tech house jem. Sweet and charming, its melodies gently take you away to a simpler place. A place of emotion and honest that often seems hard to find in a see of cheap tricks and pretention. Just close your eyes