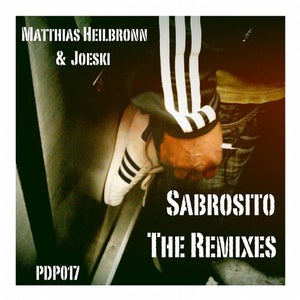 "Sabrosito", notably Matthias Heilbronn & Joeski's most successful collaboration get's the 2012 overhaul by PDP label honcho Matthias Heilbronn. What can you say about a track that starts off as a tribal banger, drops into old school Chicago house, slowly builds on hypnotic dubbed out horn and vocal samples ala Radioslave until finally resolving in a full latin jazz vocal, underlined by a bass line that reminds of Fingers, inc and Marshall Jefferson, just to come back into tribal territory to finally peak out with some detroit, Carl Craig sounding techno stabs and analogue synths. It's a 12 min journey through all things house music. You'll need to hear it for yourself. Matty is certainly starting 2012 on a high note and the two keep pushing the creative envelope!
PDP

Tedd Patterson: I absolutely love this! Thank you, got my full support. I like yalls shit. ;)

Master Kev: Definitely going to WORK the floor for me at Sullivan Room on Friday night.. thanks bro!

Gareth Sommerville: Both mixes are sounding great! Thanks for sending.

Rob Sperte: Outstanding!! All mixes are smoking hot! I love the change and build up after the half way mark on the 12:00 min version. I played it out last week and it was massive!!!!

LordJP: Thanks for dropping these new Sabrosito Mixes in my box bro...... Loving both mixes equally but the first one is just off the chain. Bumping Tribal and then back to the 90's for a minute......Then BOOM: Latino Fantastico follwed by some tweaking Detroit sweatyness!
This will be getting dropped in London this weekend and I can't wait to see the crowd jump with the Latin explosion:
Great work as usual. Peace

Alessio Furia: thanks for sending me the new release... i like so much! pure energy :