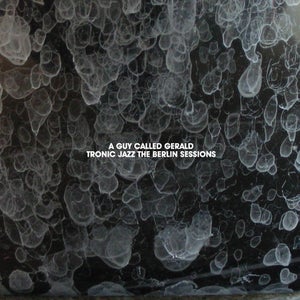 A Guy Called Gerald has spent the last couple of years flitting through shadows, turning up on labels like Perlon, Beatstreet and Sender like a peripatetic prophet of the Berlin underground, seeding the scene with cryptic singles that return to the past to suggest alternate futures. Now he returns to Berlin's Laboratory Instinct label with the follow-up to 2006's Proto Acid: The Berlin Sessions, the album that re-established Gerald as an acid hero and techno auteur. Tronic Jazz: The Berlin Sessions builds upon the foundation established by its predecessor to create an even more powerful statement of intent, one that communicates more persuasively than ever Gerald's vision for techno in its third decade of existence. One immediate difference stands out, this time around. Where Proto Acid offered a seamless mix of 24 cuts, recorded in one epic session, Tronic Jazz collects 13 standalone tracks. That's welcome news to DJs. But there's something else: freed from the flow of the mix, the tracks go deeper into themselves, even while contributing to the overall shape of the album as a single, coherent form. They're more varied in tone and mood, and even tempo. While Proto Acid was, by definition, a tracky affair, a kind of puzzle comprised of interlocking pieces, Tronic Jazz stretches out to explore its ideas in greater detail and greater depth. Nothing overstays its welcome: Gerald is a master of concision, and he manages to express everything he needs in five-minute chunksinside which time stops still, arrested by the interplay of deftly programmed machine rhythms, carefully arranged chord progressions, and a masterfully intuitive sense of sound design. The main thing relating Proto Acid and Tronic Jazz, of course, is their resolutely analog underpinnings. Like Proto Acid, Tronic Jazz is an extension of a life spent listening closely to machines, knowing exactly what knob to tweak at exactly the right instant. It represents a feedback loop through the artist and his circuitrya spontaneous journey though the miles of silicon in his vintage boxes. And every track's arrangement, likewise, is an extension of a life spent listening to his audience. Following on Gerald's unique performance styletwo laptops left unsynched, an on-the-fly fusion of molecular selection, DJing and improvised production that he calls "Responsive DJing"Tronic Jazz's 13 tracks all know exactly where their listeners want to gom and they drive forward with uncommon focus, though not without satisfying the occasional devious urge. You could call Tronic Jazz' sound classic: its Spartan drum machines, analog synthesizers and carefully sculpted funk are all modeled after a blueprint laid down decades ago in Chicago and Detroit. In great contrast to so much electronic dance music of the past decade, it's not generally concerned with the digital realm. It avoids the "feature creep" afflicting too much house and techno, where the possibility to do just about anything with sound leaves the music at an impasse, piling on effect after effect, techniques suffocating musical ideas. It's more concerned with the expressive potential of a restricted kit: finding the loophole in familiar rhythms to turn them inside out with a single, carefully placed accent. Cutting a glissando lead through a field of drum shrapnel, like some kind of pixie earthmover, or rubbing two basslines up against each other til they throw off sparks. After so many years of digital anything-goes, you might have forgotten the kind of sounds that are possible with "old" machines: the way a lead stacked against tuned percussion and shrouded in pads can evoke still other sounds, hidden in the mix, or maybe not really there at all. It's a ghostly, suggestive presence, a kind of evocation of infinite possibility within the context of a limited set of inputs. In that sense, Tronic Jazz follows a certain minimalist impulse, but it's far too lush ever to be mistaken for the dread "mnml" of recent years. This stuff is wide-eyed and full of life. When it funks, it funks hard, and when it smoothes out, it can be as intimate as a hand-written note left on a lover's pillow. As "classic" as Tronic Jazz may be, the album refutes any notion that "classic" equals "retro," that the ideas have all been expressed before. Tronic Jazz takes the foundations of house and techno as though they were a kind of language, and speaks volumes with them.