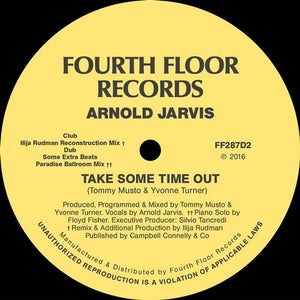 Take Some Time Out

Arnold Jarvis' 'Take Some Time Out' was first released in 1987, the year that Fourth Floor Records was born, and it stands the test of time as a seminal release for the label. The track perfectly characterises the stand out productions that keep the house music world returning again and again to its catalogue for inspiration.

Following up on a special vinyl re-release in September, this digital pack includes some bonus tracks and tools, covering all bases for DJ use. It includes the 'Club' and 'Dub' mixes that made up the original release, plus a 'Reconstruction Mix' by Ilija Rudman. Ilija delighted Classic Music Company earlier this year with his minimal take on disco in track 'In Her Eyes'. His approach to the 'Take Some Time Out' re-work has the same deconstructed vibe; the loose percussion and punchy melodic bass gives a pleasing spaciousness to the track, giving the record fresh life and re-imagining it for 2016. The bonus bits are the 'Paradise Ballroom Mix' and 'Some Extra Drums', for those who want to harness that timeless Fourth Floor beat.


Arnold Jarvis 'Take Some Time Out'