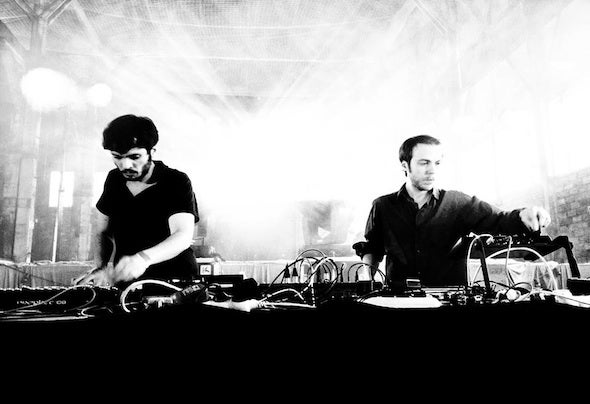 What happens when you put two techno-obsessed producers in a room together with a bunch of computer hardware and analogue tools for an extended period of time? We’d like to think something much deeper than just a psychedelic listening experience. Benoit Legrain, after his debut Loud Vacuum EP under his BNY alter-ego. at first sight when we saw the waves crash and transform before our eyes and put us into a sort of waking REM hypnosis. In a matter of only a few heartbeats, we dove into a deal with the duo and released another first with French friends Benoît Legrain and Nicolas Villebrun setting themselves off in a series of chain-reactions, galvanizing audiences with their new S.O.S. sound. On the other side of the synthesizer, artist Nicolas Villebrun is no stranger to the music industry. Known for his guitar work in the electro pop-rock group Poni Hoax, Nick brings an entirely different set of skills to their live electronics project with his experience in live music. Quickly identifying themselves in 2006 with their debut hit Budapest ― produced by nu-disco giant Joakim and released on his very own Tigersushi label ― Poni Hoax exploded in clubs worldwide after being announced the same year in Pitchfork’s Top 100. The Society Of Silence sound seems to act as a catalyst in a complex creative process involving two complementary sets of influences and psyches, curing into something much more concrete when combined, and with support from artists like Anthony “Shake” Shakir, strong reviews in Resident Advisor, and live concerts for Warp, these two wise-guys continue to win the hearts and souls of producers and DJs alike Then “Matin Noir” sees them once again exploring the techno expanse, this time backed by a stunning remix from Ukrainian producer, Vakula. July 2013 Unijambist is released on Versatile Records, this EP comes w/ a 2nd one called To the Maggot out January 2014. These 2 EP had great feedbacks from King Britt, Samuli Kampi to Moerbeck… Now, it’s time for the parisian duo to reveal SOS02, their new maxi, back on their own imprint. Chroma is a jacking techno track with deep dub synth’s chords. The release also comes with a Tunnel track, for dark clubs and Tascam Dub, which is a low-fi tape stretched track. The EP is already supported by Nick Hoppner and Anton Zap.