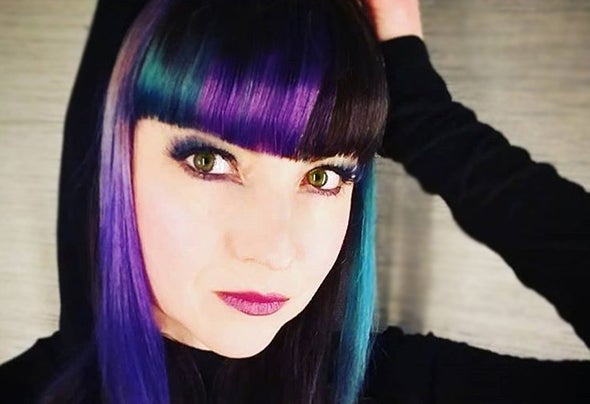 SenseNet (Cheney) is a new female DJ / Producer / Musician based out of Asheville, NC with roots in the Florida electronic music scene. In 2019 she released her first single “Past Gift” on Force Recordings. The following year, 2020, saw her return to the studio with a remix of Airstrike’s “Limerence”, and “With You” on Repertoire’s compilation album “Streetlight Vol. 1”. Later that year she also released a special charity track “What You Said” donating all proceeds to The King Foundation to help promote racial equality in America and abroad. Entering 2021 she released the chart topping remix of Oona Dahl's 'Wait .lifted' on DJ Three's Hallucienda label which reached #1 on the Beatport Label Top 10. Next she dropped her first ever collab with partner and fellow producer, A1-Voodoo entitled 'Landstrider" quickly followed by the certified crowd favorite 'We Will Reprogram' (b2b 'You Were My Ghost') that had been on dub for well over a year. Another milestone met in 2021 was the launch of her first label imprint "subsong' focusing on Space Ambient / Experimental music containing synth heavy textures and soundscapes; a style you also hear echoed throughout her DNB compositions. Coming on strong in 2022 and beyond will see her first release on Tuff Love Dubs (a contemporary jungle label exclusively releasing on 10” vinyl dubplates) and select drops from her ever growing stack of crowd favorite dubs! She also plans to revive her Twitch channel, TheSenseNet, performing live improvisational sessions focusing on a mix of analogue and digital gear. As a DJ, she’s heavily influenced by the Industrial genre (Trent Reznor, Nitzer Ebb, Jackyl & Hyde) & classic artists like Herbie Hancock, Led Zeppelin, and Pink Floyd. She loves going from atmospheric jungle to hard-hitting amens, then back into dark & ominous two-step vibes. Taking cues from the mixing styles of Doc Scott, Coco Bryce, and Sonic, she doesn’t limit her sets to any particular era. You're likely to hear her mix a jungle classic by Omni Trio or LTJ Bukem right alongside current releases from Dom & Roland, Blocks & Escher or Seba, It's the blending of these various stages in this music's history into a finely woven sonic tapestry that gives the lady her 'timeless' sound. SenseNet has been creating her whole life and earned her Bachelor’s Degree in Fine Art with an emphasis on electronic media. Combined with classical piano training since she was six and having dabbled with many other instruments, she loves incorporating multiple sonic and visual elements into her performances. You can find her performing live every Friday night on Twitch where she's been DJ'ing the weekly DNB show "Straylight Sessions" since 2018 along with her partner A1-Voodoo. "Straylight Sessions" is the pair's donation of time and love toward keeping the scene and history of Jungle / Drum & Bass alive and well. By playing classic tracks as well as the freshest future promos, they are educating viewers about the full 25+ year span of this culturally rich and sonically diverse genre, bringing knowledge and passion for the music to old and new fans alike.