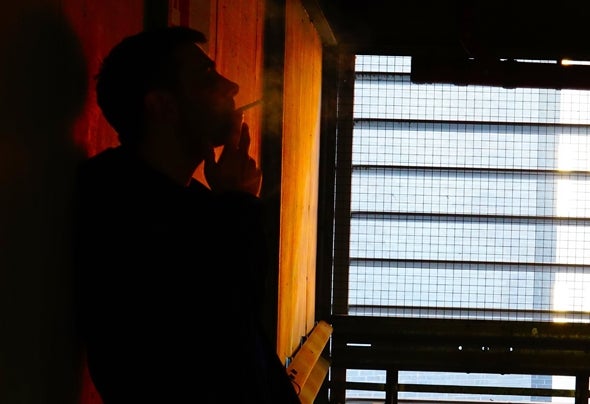 If you want to know what Gabe Gurnsey’s debut album Physical sounds like, the first thing you should do is forget all about Factory Floor, the group he co-founded 13 years ago. Gone are the cold, lengthy, stripped back deconstructions of no wave electronica and industrial techno, abandoned in favour of something altogether warmer, torrid and… well, succinct. “It’s a real departure from Factory Floor” he explains. “Yeah, that was the intention. There’s only one track over six minutes long! There’s only one crossover point on the song ‘Night Track’, which is 6’33” - that’s probably as close to Factory Floor as it gets. What I wanted to get into with //Physical// had more to do with exploring songwriting and structure. The album is very escapist in one sense even though I don’t want to escape from Factory Floor but what I do on my own has to be separate and it has to explore new avenues.” Gurnsey started writing tracks in his downtime from the group early 2017 and by the start of that Summer he had 30 demos ready for work. He admits he worked very quickly initially but then gave the tracks 12 months to develop fully into a new sound. And that new sound - a 21st Century take on muscular electro, Balearic synth pop, EBM, proto-Hacienda militant funk, early Chicago house and minimal, Neptunes-referencing beats - can be experienced in full on //Physical// the album released on Erol Alkan’s Phantasy label this August.