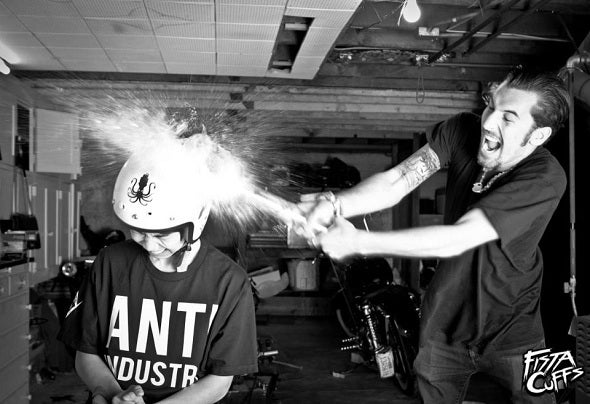 As people talk louder and louder, one of the more commonly heard names in the underground bass music scene has been Fista Cuffs. Fista Cuffs got in the Moombah game early, carving out their style as a harder, grittier, dubstep inspired Moombahcore. Moombah+ called them "One of our favorite groups doing moombahcore," and their long time fans acclaim them as pioneers of the sub-genre. After establishing their spot in moombah, Fista Cuffs has branched out and repeatedly shown their ability to dominate all genres of bass music. Since establishing their presence in the bass underground, Fista Cuffs has spun both on and off stage with Nadastrom, gaining the respect of the legends and creators of their genre. Fista Cuffs song "Fortress" made its international television debut when DJ PaulyD played it during the Fox Teen Choice Awards. Recently after its airing, Fista Cuffs held a remix competiton for "Fortress" and released the album on beatport, where it charted at #43. In their relatively shorttime together, Fista Cuffs has played such sought after venues as The Shrine Auditorium, The Roxbury, The Avalon Hollywood, The Malibu Inn, The House of Blues, Temple SF, and many various stages in San Francisco; and have shared the stage with the likes of Nadastrom, Designer Drugs, Dieselboy, Manufactured Superstars, and Felix Cartal, showcasing their ability to entertain a variety of crowds. Fista Cuffs recently played their first set at a major music festival, taking the stage for a “Fista Cuffs vs Gummy” set at Snowglobe 2012, and subsequently packed out an after-party “PostGlobe” featuring Carnage, Zomboy, Seven Lions, Krewella and more.Fista Cuff's internet acclaim has been enormous. With multiple posts from Techibeats.com, Moombah+, Moombahthong.com, MagneticMag and theuntz.com, Fista Cuffs has the full support of the blog world. FC has been very active with Moombah+.com, performing multiple sets for their online radio shows, including their 1 year Anniversary in which Fista Cuffs closed out after Kid Cedek and ETC!ETC!, and another where they closed for Sazon Booyah. Moombah+ also released FC's remix of Figure's "Move" on the "New Wave of Moombahton IV" which received praise from many of the big names in Moombah. Although the "New Wave of Moombahton" was released as a free download, Fista Cuffs has had numerous releases on Beatport, including their winning remix of "Must Destroy" for Figures "The Destruction Series Vol. 1" release that broke the Beatport Top 10 Releases. This has since gained them the praise and acknowledgment of Figure, one of their greatest influences. One of their latest Beatport releases, "First Contact" was featured on a Beatport created chart titled "On the Rise: Moombahton" with the likes of Dillon Francis, Kill the Noise, Datsik, and Diplo. Given the rate that they're moving, it would seem these boys never sleep. With their current momentum, Fista Cuffs is a powerful new force on the scene, and one with no end in sight.