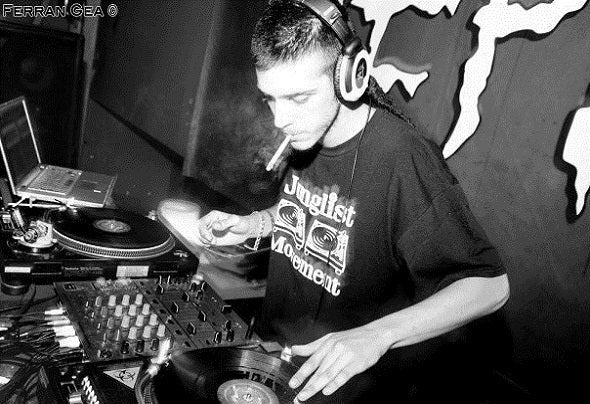 Edgar a.k.a Dijeyow starts in a very short age being interesed in electronic music (2000) and creating in a short time a unique style. Hiphop and breaks are part of his roots and its reflected in his way of understanding music, and in his performence with a very sharp scratch technic. He is member of Skorea Sound, jungle/reggae sound system in Barcelona (Spain). In December 2008, longside with Jera & King Horror sound creates ragga-jungle label, "Breaknest", with references from artist of all arround the world, and pioneers on the scene as Osci (Clashplate Sound), Paulie Walnuts & Twinhooker (Mad Dem Sound) or Dj K (Killa Rec.) had shared record with him. In 2010 creates "Dubnest", dubwize/drum'nbass label where the distribution of his first releases takes an international expansion with Dj Panik (Orange drum) and Isaac Maya (Mexico) or Run Tingz and Blackout JA (Bristol/UK).In 2011/2012 digital label's are interested in his choones, and he sign with: "Astrofonik Rec's", "Breakstorm Rec's"," In da Jungle rec's", "Future Tone rec's" and many more coming soon...Timestrech lover, dubplate maker and really sound killa, you can't lost my show sure. Big up all supporters!