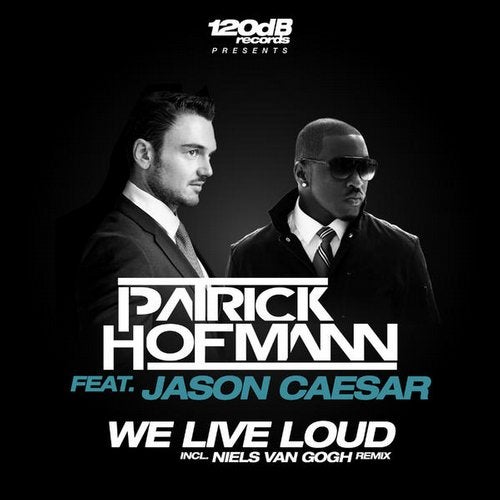 Coming up next on 120dB: PATRICK HOFMANN's new progressive house ear worm "We Live Loud" featuring one of the most gifted and successful voices in electronic music JASON CAESAR and a slammin' remix by international star DJ & producer NIELS VAN GOGH!
With more than 16 years of DJ experience, Patrick Hofmann's enthusiasm for electronic dance & club music shines through in every set and at every party. The experienced DJ played international gigs at Ministry of Sound/London, Prater Dome/Vienna, Mallorca/Spain and plays at Pacha Ischgl/Austria every year. In 2012 his first solo single was released on 120dB Records: Patrick Hofmann feat. MAX ?C ?' V.I.P. (DDC Charts #5) featured MAX ?C, one of the most sensational and successful voices in House/EDM music (?Sending My Love?, ?I Found U?).
Hailing from Atlanta, Georgia USA, singer Jason Caesar has become a familiar name in the world of house music. His vocal versatility and writing capabilities have landed him features on European chart-topping electro club bangers with the likes of Fedde Le Grand, Laidback Luke, DBN or Deniz Koyu. Jason continues to work with some of the industry's most sought-after producers and artists such as Ne-Yo, Justin Bieber, Mike Will Made It, Blank & Jones and many more!
Coming along is a massive remix by international heavyweight artist NIELS VAN GOGH, whose killer remake of "Pullover" on Doorn Records is supported by global players like Dimitri Vegas & Like Mike, David Guetta, R3hab, Sander van Doorn, W&W, Dada Life & many more! ?As a bonus, ?We Live Loud? includes a classic instrumental Violin- and Piano treatment by the mysterious Chill Out-Project Davia - the ?Sunset Walk? speaks for itself and completes the whole package for a great summer tune!