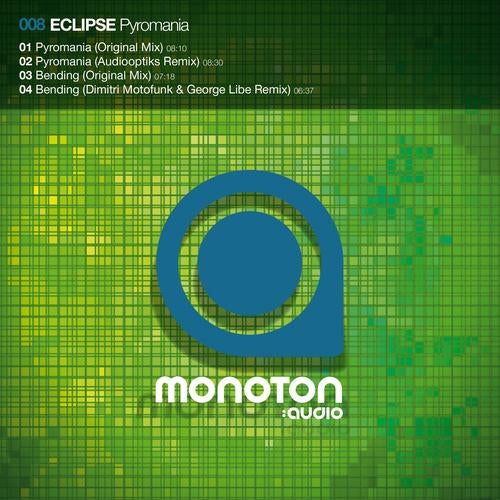 Also the eighth release welcomes a new family member. Eclipse is the pseudonym of the Dj & producer Philipp H. from MuensterGermany who was born in 1991. His interest in electronic music began at the age of 15 when his friend introduced him into the art of spinning vinyl on the turntable. Two years later he started to produce his own tracks. After hours and hours of trial and error, he finally found his own style which stands for deep, atmospheric and rhythmic techno. After his first release as a remix on LLD Records, he is looking forward to drop his first solo EP on MONOTON:audio. This EP comes with two original tracks, one remixed by Audiooptiks who is already well known by previous EPs on MONOTON and the other one is remixed by the Greek duo Dimitri Motofunk & George Libe. Feedback: Audiooptiks - rockin ep-originals and remixes are for me ;) Caspian - Clear release only bomb in !!!! Contrats monoton Dr. Hoffmann - Great tracks, will try them out! Thanks Drumloch - Bending ( original mix ) is the track of the ep Dumani - nice one ;) thanks Flex - Audiooptiks is the winner of this release ! Forest People - nice tunes here! Go!Diva - Nice work on all, Dimitri Motofunk & George Libe Remix is great Hierro - Great EP - Motofunk & Libe Remix is my fav Kerstin Eden - Pyromania and bending are bombs! Thx! Matthias Grehl - downloading thx Meiko - both original mixes are great. full support. thx! Mesa - nice ep ! Michael Kruck - Both Pyromania mixes are the best for me! Nicole Moudaber - Great Stuff Philipp Dengler - Definitely will play the Audiooptiks Rmx Stefano Infusino - Audiooptiks rmx is cool! thx Steve Masterson - Another high class MONOTON:audio release. Vegim - Bending (Original Mix) is the one for me. Will play it out.