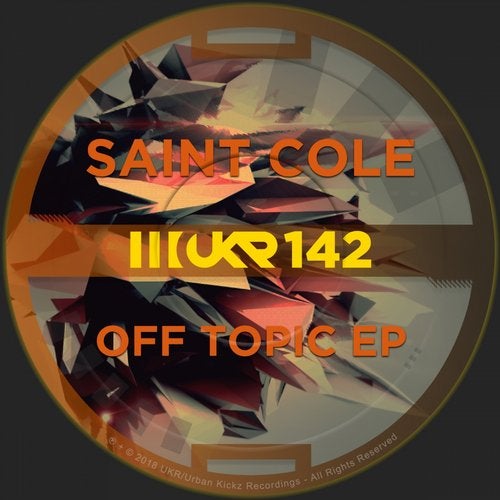 UKR welcomes back Yorkshire's techno magician Saint Cole with what is his most prolific techno workout yet! For this very special release, Saint Cole did something quite extraordinary and different from his previous work. In essence he captures the raw sounds of Chicago and Detroit that have been an influence to him since his early production days, creating an epic 5 track super dance floor friendly EP of peak time stormers that scream raw, jacking, vibrant flavors of creativity and passion for the underground movement.

Titled 'Off Topic EP', Saint Cole bangs it starting off with an epic chugger that will have the warehouse steamin at 3am for sure. 'Slow Jump' churns its way into the night with its larger than life kick, distorted dark bass squelches and sultry vocals from Chicago's Lester Fitzpatrick. Saint Cole moves the floor with this forward thinking underground marcher, taking control and relentlessly pushing the listeners to accept that he and only he is in control with his march-like cadence and larger than life presence. Next up we've got a peak time burner in the form of 'Analogue Bells', a sonic belter of epic proportions. This bad boy has a tech-groove that's super cutting-edge and produced with a finesse that Saint Cole is well known for...a finesse that's in a league of his own. With its fat synth bass groove, warm round kick, whirlwind bells, and automated effects galore, 'Analogue Bells' truly exemplifies the level of quality this champion producers has been able to attain. Saint Cole delivers heat that will stand the test of time...pure fire from a legend in the making. Onward we go into the night with a track titled 'Ghetto Blaster' that is sure to have the crowd going mad!! A true belter this is, and a sure-fire anthem that people will be talking about as they leave parties saying...'what was that one track with mad synth, and that vocal saying 'Ghetto Blaster'...very very large and one of these secret weapons you save for that prime time slot when everything is on the line. Continuing on the frontal attack Saint Cole brings on Ireland techno soldier Dorbachov for an analog jacker 'The Greatest Pimp Ever', a jewel of a warehouse banger. With its acid line and fierce percussion, gangster vocals and fury of effects and quirky stabs, right when you thought the EP couldn't get any larger, two powers collide and deliver yet another peak time rocker! Dorbachov elaborates on the original with a special 'Speak Easy' remix that pushes things to the extreme with its clean stripped down late night attitude...a roller that just don't quit. Super effective technically brilliant work from a man who has big recent support from Slam, Sasha Carassi, Joseph Capriati, L.A.W., Dave The Drummer and many more. Last but not least is an ode to UKR with Saint Cole's 'The House of UKR'.... a mesmerizing techno anthem that weaves arp synths, synth stabs with filtered percussive goodness and inspirational vocal samples into a dark room groover that bangs until we all see the light! Saint Cole brought us an epic techno novel here that tells the story of three decades of underground techno funk. Get in, blast it loud and experience the sound of UKR's Saint Cole...a man on top form that has brought us a release that is of the highest quality and truly memorable.