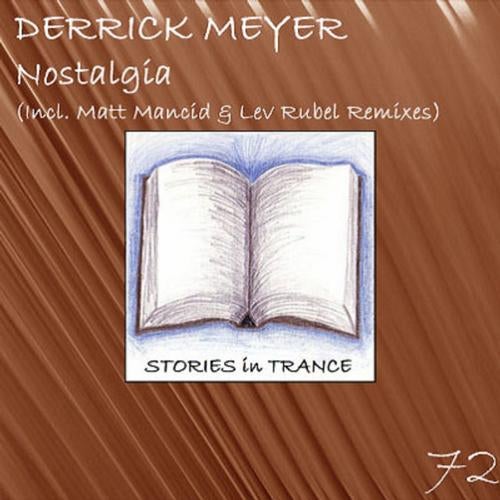 For our 72nd release Stories In Trance give you Derrick Meyer with the three track single Nostalgia.

Stories In Trance legend Derrick Meyer brings his defined style back to the fore with his original version. Being one of the USA's best uplifting trance producers, Derrick's back catalogue with us is vast and equally great. This is his first original offering since the seminal Utopia EP (SIT #42) back in October 2012 though his most recent outings include remixes of Airborne Angel's Apollo (Relaunched) (SIT#50) and After Morning Productions' White Poison (SIT #57). Once again he delivers the goods adding his usual production excellence to the unmistakable melodic dynamics and expertly polished layering which all amount to a brilliant track.

The first remix is from Matt Mancid. Hailing from Germany, Matt is on remix duty for the second time following his debut for us with an impressive remix of David Surok's Avalon (SIT #62) and sandwiched between that and this was his first original on Stories In Trance, the superbly emotive Anti-Climax (SIT #65). Matt's production career to date has seen him make appearances on labels such as Technotrance-essentials.com, German Engineering, Euro-Dancer.com, Niiemo and Trance Allstars. This is a perfect representation of his talents; a beautiful, warm and fantastically well produced piece of trance and certainly a standout track. Look out for plenty more great tracks and remixes from Matt in the coming months.

The second remix comes from Ukraine's Lev Rubel. Lev made his production debut for Stories In Trance with Insomnia as featured on the Tibbs EP (SIT #44) in October 2012. Since then he has lit up the Stories In Trance catalogue with originals Fairyland (SIT #53) and Share Your Moment (SIT #61), and in addition gave us fantastic remixes of Ethereal (SIT #49), Bridgestone (SIT #52), Exit (SIT #56) and Anti-Climax (SIT #65). He continues to showcase his undoubted talent with another great remix; a delightful flow and feel infused with his excellent production expertise making this a track to relish. Lev is a producer who continues to be widely influential on Stories In Trance.

Stories In Trance aims to uncover the most talented and imaginative new producers and team up with some of the more established names in the scene to work together in evolving the sound. This release sticks firmly to our philosophy of showcasing a diverse range of sounds within trance and we hope you'll enjoy the variety of imagination and creativity on offer in this release.