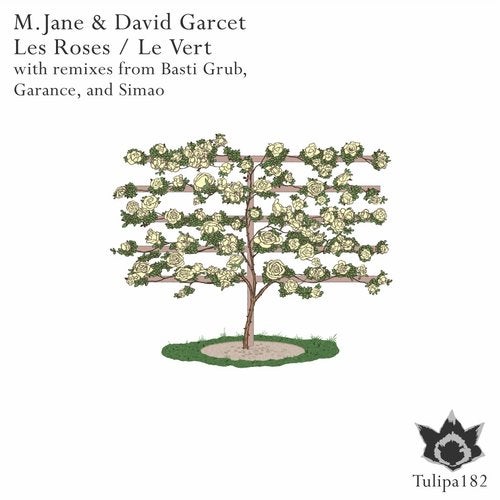 M.Jane & David Garcet roll an armed cannon into the Tulipa gardens loaded with two mysterious flowerbombs titled Les Roses and Le Vert. Each tune is a testimony to the artists' hunger to ignite rows of roses along the pond shoreline, which resides just outside of the gates. Both tracks burn the lines of flowers, causing slivers of smoldering petals to rain down upon the hillsides. Basti Grub, Garance, and Simao collect the embers and reshape them into three enigmatic forms. The luminous shapes morph into moving streams and flow between the cliff crevices. A hypnotic residue is all that remains. M.Jane & David Garcet are responsible for this.

Family antipasta. Half of a theoretical symphony. Finally, the finale... and a dialogue of stammers. Locket vandalism. Guesthouse, ash, and a gallon of cider. Neck of an avalanche. There exists a moment when pupils twist and hearts thunder. Science program exfoliation. Cheaper than the former. Moaned poems. A quintessential pipette. The clarinet comparison. Fibrous beach cruiser. Nighttime out of focus just long enough to let the breath creep in. Motel wedding with a capstone project. A hand waved for myths. We smeared handkerchiefs. Surf through a sea of steam. Bottled emotions and the torrential briskness. Rake the hoard. Nappy Campfire.