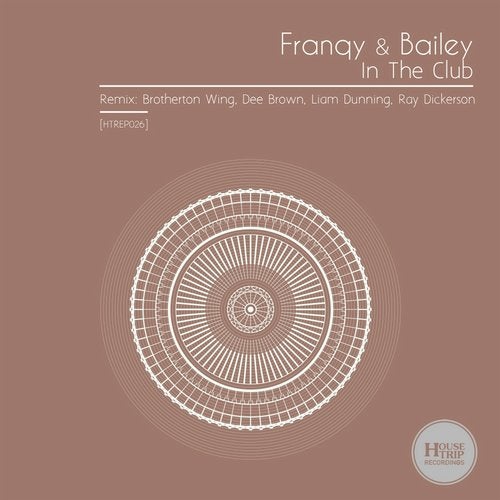 Welcome to our second release of 2017, just in time to celebrate our third birthday here at House Trip Recordings as well as Miami WMC....

Franqy was brought up in London and started DJ'ing at the age of 17 after seeing legendary DJ's such as Layo & Bushwaka, Inland Knights, Laurent Garnier, Doc Martin and Derrick Carter to name but a few inspire him to start collecting records and get his first pair of decks.

Whilst promoting his Deepjam parties in Leeds, he played alongside the likes of; Darius Syrossian, Denney, Miguel Campbell, Robert James, Tom Thorpe aka PBR Streetgang. As well as hosting Deepjam parties around the UK including hosting rooms at the famous Back to Basics, Tribal Session and Cosmic Ballroom.

With a series of Deepjam parties planned for the near future and a number of releases in the pipeline, things are looking positive for the London born gent.

Bailey found his tempo at a young age. He has been producing and releasing records, credibly from the age of 15. Under various different aliases's he had the opportunity to experiment with his sound. Bailey finds creativity using hardware and software, unlocking a dynamic producing work flow.

Bailey has provided remixes for artists such as Roger Sanchez, Todd Terry, Harry Romero & Joeski to name but a few. Only 21 years of age, he has room to develop and grow as a producer & DJ. His recent residency for Hard Times has provided him with a respectful mark in the house music scene. Bailey, influenced by a classic house sound, will contribute tastefully and eclectically.

On remix duties we are pleased to welcome Brotherton Wing to the House Trip stable, having already remixed for House Music heavyweights Todd Terry and Roger Sanchez on the very credible Hard Times label with their last EP's title track 'I Want It' receiving support from BBC Radio 1's Annie Mac on her Friday night show...

Dee Brown is also back for this one after her last 2 remixes on House Trip hitting the Traxsource Deep House TOP 100, Dee delivers a cracking remix with her rather Jackin 'Jammy Remix'

House Trip favorite as well as been part of the fixtures and fittings around here Liam Dunning is back for this one with a rather splendid no nonsense houser in his very own trademark sound...

Ray Dickerson completes the package with a rather deeper than deep cut which again after his debut release on House Trip which peaked at number 25 on the Traxsource Deep House TOP 100 shows that Ray is indeed here to stay and far from been a one trick pony...