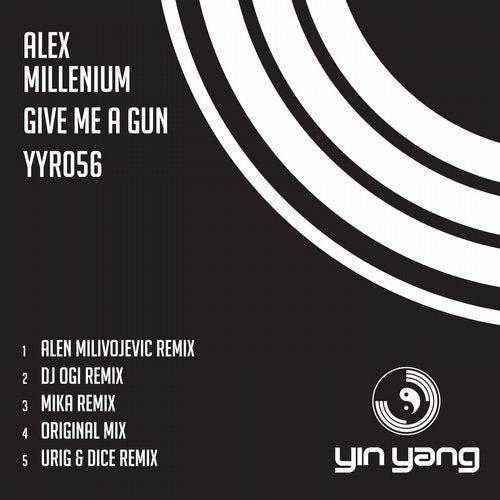 Ukrainian sound producer and DJ Alex MilLenium is one of those artists who is climbing up and up on the modern electronic scene. His productions have been supported by Umek, Christian Cambas, Piatto, Da Fresh, Lucca, Olivier Giacomotto, Anthony Attalla, Ahmet Sendil, Spartaque ,Koen Groeneveld and included in Umek's radioshow "Behind The Iron Curtain". Now he arrives on Yin Yang. The original Give Me A Gun is a fantastic piece of techno art. Probably the best track to ever leave Alex's studio. Fantastic noises and a great vocal combine to create one of them originals that just keep getting played over and over, always knowing it will please the dance floor. TRULY INCREDIBLE . First up on the remix duties is one of the best producers on the current scene - Bosnia and Herzegovina's Alen Milivojevic. This is DEFINITELY no let down, Alen already having his hands on the superb original redesigns it to his own style and .. wow. The remix is one hell of anthem mix that just hypnotises you. A Superb fantastic remix (drools).. Second up is also an artist from Bosnia and Herzegovina. Its Yin Yang's very own Mika. Again.. Another fantastic remix and another that made my jaw drop when I heard it. Again when you think another mix cannot hold up to the original (as well as the Milivojevic remix), it does.. This remix is Mika's very own funked up style that makes him one of Yin Yangs favourite producers. pure techno, pure divine remix. Outstanding. Next up is Germany's up and coming stars Urig & Dice, again a great remix this time done a little differently and in that sexy great style that Urig & Dice are getting a GREAT name for. Very very sexy. Last up but not least is Croatia's techno man of the moment - DJ Ogi. When Ogi heard the original he was very excited, going on about how god damn huge it was. Well he turned that excitement into a harder style approach that will no doubt have the hard edged techno heads screaming for more. Magnificent.

Give Me A Gun