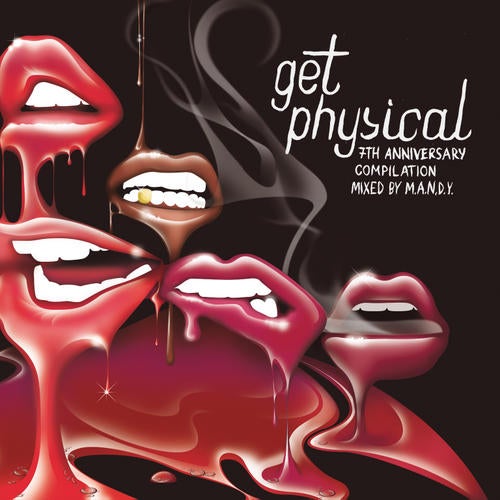 Get Physical Music turns seven years old in 2009, having released over a 100 singles and over 25 albums. To celebrate this landmark anniversary, M.A.N.D.Y. have put together a dynamic 24-track compilation showcasing what the label does best. The clue is in the name: Physical is first and foremost about moving people: their hearts, their minds, their behinds. The 7th Anniversary Compilation is centered around material from the label’s last three years, and features contributions not only from stalwarts like DJ T. and Booka Shade but also friends, extended family and more recent signings. The emphasis throughout is on danceability; you’ll find bona fide club anthems – Patrice Bäumel’s ‘Roar’ and Booka Shade’s ‘Duke’ among them – alongside lesser-known bombs, like Matthew Dear’s ‘Free To Ask’, a track recorded specially for his 2008 Body Language compilation. Tracks exclusive to this CD include a new remix of Damian Lazarus’s ‘Neverending’ by M.A.N.D.Y. and Alexkid, and a ‘Saxed Up’ version of Dakar’s club killer ‘I’ve Got That Feeling’. This mix really is all about the dancefloor – which is the place where Get Physical was born and where it continues to thrive. DJ T. appears with the swinging, percussive house track ‘Gorilla Hug’, taken from his new album The Inner Jukebox, and also in collaboration with Thomas Schumacher (‘Lower Instincts’) and his old pals Booka Shade (‘Played Runner’). The Schumacher-helmed Elektrochemie seduce us with the molten vocals and hoover-bass of ‘Mucky Star’, while Riton teams up with Heidi for the tough, jacking, Chicago and B’more-influenced ‘To The Gum’. Elbee Bad and Slok, Einzelkind vs Meat, Jona, Audiofly X, Tiger Stripes – a stellar cast has been assembled for the 7th Anniversary Compilation, drawing on the great richness and variety of the Physical catalogue. Mac Neumann’s ‘Calypso’, for instance, is taken from the Travelling The World EP, the second ever release on the pioneering Get Digital imprint. What all of the gathered artists share is an unwavering sense of what makes dancefloors groove and peak, bubble and explode; they’ve taken Get Physical’s scene-leading, award-winning legacy and built on it, helping cultivate a sound and aesthetic which makes Physical one of the world’s most enduringly popular outlets for electronic dance music. It’s all thrown together with M.A.N.D.Y.’s customary panache, an intuitive understanding of the dancefloor which has made them one of the globe’s most in-demand DJ duos. Get Physical has grown to absorb and accommodate innovations in musical style, production and practice, not to mention the ever-evolving tastes of its audience. But all the while its original vision and philosophy has remained intact: simply to create and nurture great dance music. Forget meaningless tags like electro-house, minimal, tech-house, the 7th Anniversary Compilation showcases what can only be described as the Get Physical sound. Often copied, but never bettered. Still delivering the goods after seven years.