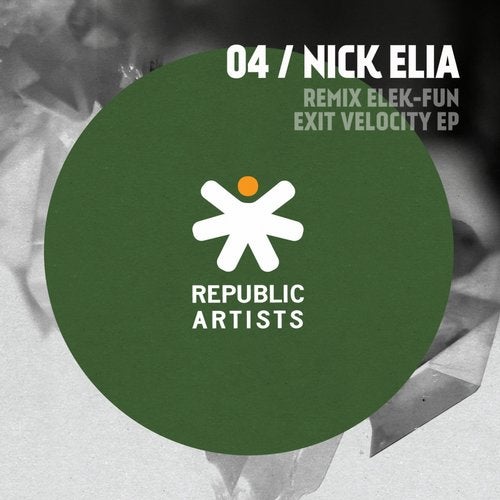 We are proud to introduce Republic Artists' 4th release Exit Velocity EP, delivered by Nick Elia, containing 2 original tracks seamlessly tailored for the club with the added bonus of a stellar remix from Elek-Fun.

Nick Elia, a purist DJ/producer that has been intimately involved with Londons underground electronic music scene since the mid 2000s, certainly knows his way around the studio and in particular producing deep pulsating techno: a Roland artist, with a deeply held passion for technology and raw analogue sound.

The title track Exit Velocity kicks off with robustly constructed beats, right before the killer bassline drops in to dominate the techno crossover and dark flowing tech-house destined to proliferate in the underground. On the flipside, Glue pays respect to the root components of Techno with a hypnotic vibe, rolling beats, experimental noises, ever-evolving soundscapes and a dark dubby vocal.

Leading Astray Records founder Elek-Fun's edit of Exit Velocity takes a deeper turn whilst retaining the energy of the EP. The London based Spaniards acid sounds, classic beats and haunting stabs roll with the bass until a trippy soundscape kicks in after the break.

Another great release from Republic Artists, perfect for the dark hours.