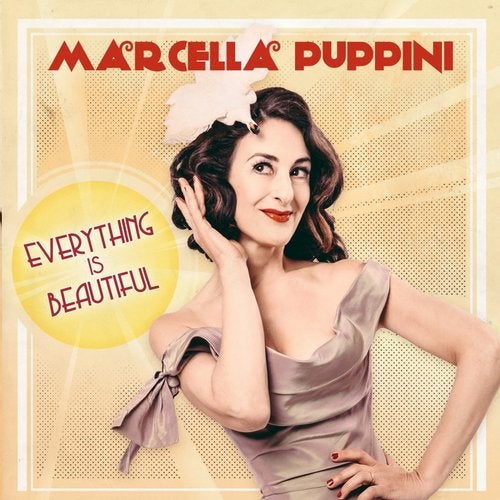 Ex designer for Vivienne Westwood in late 90s London, ex Mayoress of Camden, founder, in 2004, of close-harmony trio The Puppini Sisters who are considered as the world's authority on vocal harmony for their unique arrangements and vocal technique, with over half a million copies sold throughout the world and collaborations with Michael Buble. Musical Director of large scale Burlesque and Variety shows in some of London's best theatres and clubs, leader and founder of indie-rock-Weimar Marcella and The Forget Me Nots, and the only female guest conductor of the prestigious Russian Jazz band The George Garanian Big Band.

It does not come as a surprise that Marcella Puppini should have gathered around her, from all over the world, several different collaborators for her solo debut; all very different from one another, some slightly bonkers; some well known, some unknown, indie, irriverent and unexpected. Everything is Beautiful, a project she descrbes as 'Electronic Vintage, with an intoxicating blend of Swing House, Electronic Motown-Pop, Fellini-esque waltz-hop and soaring ballads.'
Jean-Max Riviere, icon of Existentialist France and collaborator Brigitte Bardot and Juliette Greco is the author of the French text of Boom Boom l'Helicoptere. Marco Pirroni, guitarist and co-writer for Adam and The Ants, plays guitar on I Know You Lie; French DJ and producer duo Bart&Baker, pioneers of ElectroSwing, co-wrote and produced Stop Googling Me; the celebrated American rapper R.A. The Rugged Man, co-wrote and performer on The Greatest in collaboration with US producer Mr Green; and finally singer-songwriter, composer, producer, DJ and artist Stephen Coates from The Real Tuesday Weld, otherwise known as The Clerkenwell Kid, collaborate on So High as co-author and producer.

Marcella Puppini has always been, throughout her career, quite difficult to pigeonhole: a pioneer of Burlesque when it was still underground and subversive, an essential figurehead of the Vintage scene, a known face both on the indie scene and the BBC. And even now, defining her musically is quite a tricky pro position. Written and co-produced by Marcella, 'Everything Is Beautiful' reflects her International spirit, and a desire to experiment without any strategic or commercial planning and without taking herself too seriously.