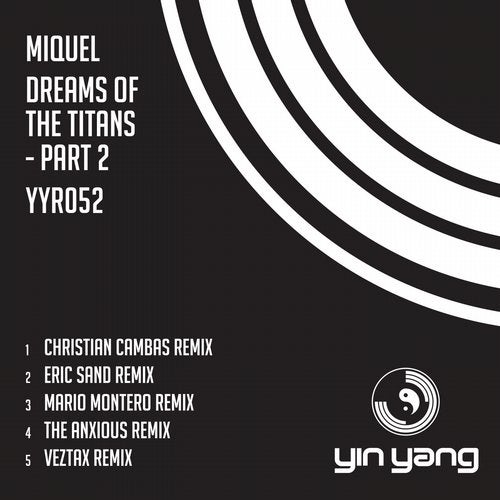 Firstly we have the Christian Cambas remix, this is some serious pumpin action with that sexy as hell rolling baseline. This is nu style techno at its finest. A jaw dropping remix, insanely good. Then we have tough pumping remix from Spain's Eric Sand, which really grooves and makes great use of Miquel's parts. Next up is another Spanish young techno producer Mario Montero. Mario's remix is very progressive sounding techno and some of his best work. Next up is the UK's infamous Mark Anxious and Chrissi. Owners of the Blackout Audio label. This is tough hard techno at its ultimate best, an incredible pounding remix, amazing techno without a doubt. Lastly but not least we have Slovenia's very own Veztax with his own trademark techno sound that always works on the dance floor. Another great release for Yin Yang - A low down on these producers :- Christian Cambas is a DJ and producer based in Athens, Greece. He is mostly known for his releases on DJ Umeks 1605 label and his entry at number 88 of the DJ Mag Top 100 poll in 2005. Besides 1605, he has released records on labels such as Toolroom, Great Stuff, Craft Music, Bedrock and many others. Eric Sand is co-owner, along with J. Vitoria, seals "Xtremetech Records" and "Tech Critikal Records". Already a recognised DJ of techno promise Almeria (Spain), mixing techno & tribal samberos. He has played along with the likes of Cristian Varela, Ben Sims, Paul Mac, Kevin Saunderson, Surgeon, Sven Wittekind, Robert Natus & Fatima Hajji. Mario Montero was born in Oporto (Spain) in 1987, his taste for electronic music started in 2001 having his first contact at djing in 2002, since then his taste for techno has evolved so much that he was devouring almost all styles of techno, influenced by techno producers such as Carl Cox, Jimmasters, Umek, Marco Bailey, Valentino Kanzyani, Oliver Oh and many others. The Anxious are Mark Anxious and Chrissi, who have been producing under this name since 1998. Their sound is characteristically dark and uncompromising, with a musical message that many have imitated, but failed to deliver. They burst onto the techno scene with a series of punishing releases on some of the worlds top electronic labels of the time, as well as their own Blackout Audio imprint. Veztax is an example of rare breed artist who prefers to dictate his own trend rather than following the herd. He has become synonymous for energetic techno. After two decades of throwing parties, producing music, performing all over the Europe and managing the respected label Vezotonik, hes now considered an leader on his home techno scene.

Dreams Of The Titans - Part 2