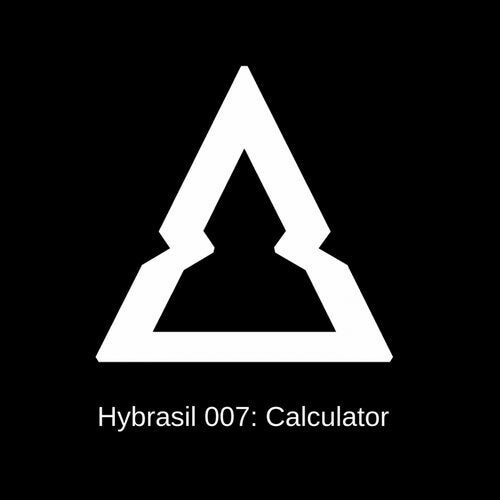 2018 was a landmark year for Irish live act, Hybrasil. He has performed alongside the likes of Carl Cox, Adam Beyer, Cassy, Sam Pagagnini and Len Faki at Amnesia, released on Gregor Tresher's Break New Soil, recorded a live mix for John Digweed's radio show Transitions and finished the year with strength in Beatport's top 50 techno tracks of the year, finishing at an impressive 28 with Lady Nada.

His latest release comes at us via his own Hybrasil label - and emphatically proves that he means business once more this time around. The second vinyl release on the Berlin based label, it again speaks volumes of his knack for crafting genuinely beguiling techno. Entitled the Calculator EP, it sees Hybrasil conjure up four thrilling techno cuts -- all of which are sure to force an impression on the 'floor.

This is immediately apparent from the off on 'Anu'. A brilliant track that rises and rises, it bursts into a cacophony of colour soon after, and is the sort of cut that forces parallels with the best of Oliver Huntemann and Dubfire. Spooky, dramatic and (as ever from Hybrasil), expertly weaved together, this is thinking man's techno of the sort that should win the producer many new fans this coming summer.

Titled in homage to the famous synth that spawned its creation, Oppenheimer is heavy on relentless vibes, and even more spiky than its predecessor. Loaded with clever drums and shimmering synths, it's pounding but also restrained when it needs to be.

'Calculator', features Dublin vocalist David Griffin and sees Hybrasil call on a host of unlikely vocal strands and a catchy, wiggling baseline that comes out of nowhere and steals our attention in no uncertain terms. Raucous and devilishly catchy, it's pure peak time fodder of the sort that DJs such as Chris Liebing or Sven Vath would surely lap up.

Culminating the release is 'Adjust', which goes heavy on the piano keys and percussion. A thrilling ride and a fascinating journey into the mind of one of Ireland's best techno producers, if you're looking for a four-tracker that's sure to work the 'floor this weather, then your prayers have been well and truly answered with this one.