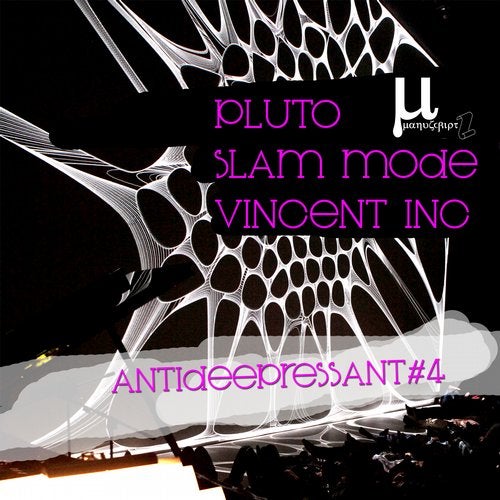 Manuscript records happy to announce the most long-awaited deep house release in 2016 "AntiDEEPressant #4" includes 2 tracks from legendary Pluto and Slam Mode with 2 remixes from Vincent Inc ::::Whilst touring with the Woodentops, the makers of the first rock and roll dance crossover club floor anthem Why Why Why, the path was clear for Rolo McGinty the main man. With a doctors order to stop singing for a while and a lengthy legal issue strangling his band, he began producing music under different names. A final secret the Woodentops 12” produced with Bang The Party was being played on Kiss Fm NYC by Tony J Humphries who was also playing it on the 4am witching hour spot on his world tour. UK DJ’s following the US garage music were shocked to find this record full of drums was from an English Indie band. Shoom. Future, Spectrum, so many clubs had done this with Why Why Why before, the Balearic Beat scene that bounced that track back into the uk during the late 80’s. Rolo took a break from Rock and Roll and dived headfirst into club floor composition, his first love in music being synthesisers as a teenager. House music was a natural progression for a like minded bunch of artists who had been following the development of electronic music and disco. Rolo began working under the name Pluto. The first recordings made were the opening salvos of Mr.C’s Plink Plonk Records label, followed by Trance Europe Express releases and a first album, Pluto Rising, which included the single Free to Run. A slab of dark Techno you heard everywhere techno. The Irdial classic Pluto v Insync Ratcatcher EP was equally picked up by DJ’s as had Rockerfeller, Sueno Plutino, Plutobeat been and It was a fulfilling and fertile moment for Rolo, known far more as a frontman of a famous band than as an individually modern producer musician of our times. Pluto involved collaboration too, with The Chemical Brothers engineer/producer Steve Dub often on board in the studio, Leslie Lawrence from Bang The Party much of the time, with Lexi Love, Dope Kid, Pascals Bongo Massive making contributions to tracks. Performing live, Pluto was a 3 Dj 6 deck experience build around Pluto dub plates cut specifically for live presentation. A live mix album Demolition Plates on Octopus Records documented this. Show Me Your Love, is one of the artists favourites, combining Afrobeat, deep house, tripped vocal and spirited carnival mayhem. The track was included in a Pluto guest mix for Manuscript records who enquired about it, having no idea it is a project loved by its creator and top of the wishlist to release one day on a suitable underground label. So the time is now! Listen to this EP called AntiDEEPressant#4, this is incredible deep tech house. It's not just a deep. It's a concept of new world. Keep it deep & Deeper than DEEP! Licensing, demos, promos: promos.vincent.inc@gmail.com Mastered by Analog Tape mastering www.facebook.com/groups/340070686070660