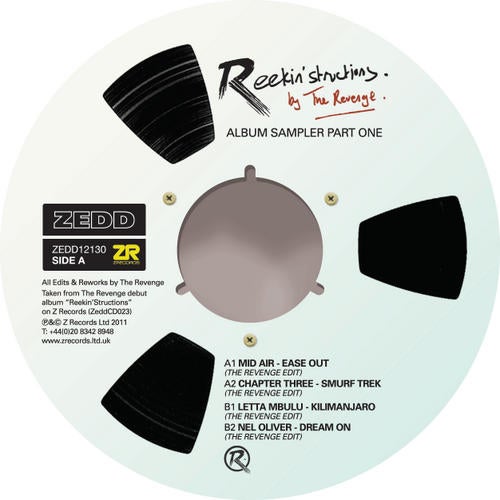 The Revenge has quickly reached dizzying heights in recent years, conquering a style that escapes labeling and crowned the king of the edit. This four track EP features tracks taken from his debut artist album titled ReekinStructions and each illustrates his talent for reinvention and reaffirms why he has become a spearhead for a new musical trend. Embracing pure disco heads, funk fanatics, soul worshipers and all contemporary electronic music lovers these tracks mark the rise of The Revenge as one of the pioneers of a generation, rediscovering classic moments from decades gone and refreshing them through his individual interpretation. Graeme Clark AKA The Revenge is an unassuming musical hero. Hailing from the isolated east coast of Scotland, he spent his early years forming a special obsession with his dads old drum machines and his parents diverse music collection that spanned rock, soul and funk. Interspersed with the glory of eighties daytime radio, these key elements shaped him to become an avid record collector and eager music producer, making his first tracks in his teenage years. The Revenge is his alter ego that he engulfs through a personal process of dissecting and re-imagining music. His fluid approach and vibrant style has captured followers of nu-jazz, vintage funk, forgotten disco through to cutting-edge house and raw dubstep. Eschewing trends and making his own pattern for music production, The Revenge is redefining dance music as we know it (and it in turn is finding it difficult to label him). Rising to notoriety through his prominent re-edits, The Revenge has matched this success on original productions on his own labels Instruments Of Rapture and Five20East. His engineer experience has been turned to material for Mark E, Jisco, Under The Shade and Fine Art Recordings. His other collaborative projects include Deportivo Street Team, OOFT!, Cronk Family Enterprises, The Hong Kong Micros and 6th Borough Project, who he will also release an album with this summer. Now harbouring production skills for over 15 years, Graeme continues to put his fingers to work on a variety of projects in the studio. Recent material has found its way onto seminal labels such as DFA, Buzzin' Fly, Domino, Pokerflat, MCDE and Dessous. Through these and regular touring to all far flung reaches of the globe, his audience continues to grow at lightning speed.

Reekin'Structions By The Revenge - Album Sampler Part One