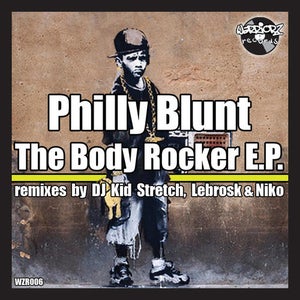 The 6th release of Warriorz Records comes with the Australian producer Phil Berrick, AKA Philly Blunt, already known in the Nu Funk and bootleg scene with several remixes and releases. The track is called The Body Rocker and its a straight up banger, taking us back to the original body rocking with dope samples, and on point beats. DJ Kid Stretch, main DJ of The Battle Of The Year Balkans (the official Bboy Battle of the Balkanian territory) and a former Greek DMC champion, based in Thessaloniki, already know for several releases for labels such as Goodgroove Records, Manmade, Wack, Timewarp and Dominance Records (Battle Of The Year OST) is first on the list of the remixers in this E.P. Making a turn to a more disco club sound, with a fat bass, combining funk loops and a club friendy beakdown, Kid Stretch lands a powerful remix of the track. Lebrosk is well know to the scene, releasing many bootlegs and mashups and his tracks are widely played over the world. Hes hosting the monthly Ramp FM radio show, The Funk Sessions (http://www.rampfm.com). Having recently remixed a track with Rory Hoy for Pale The Kid (a side project of DJ Kid Stretch along with Pale Penguin), Lebrosk is next on the list, turning the track into a bboy anthem, putting his funk latin touch on the track. BBoys all over the world, this is for you! Last but not least, this cat from Poland is going to blow your mind! Niko is the producer of the last remix on the E.P., empowering the track with hammond sounds, a funky bass loop and a funkier sax theme. He has already released Party Break and Funks Not Dead E.P. on Rebel Scream, and listening to this guys remix and forthcoming tracks, you know this cats gonna put Poland on the map!