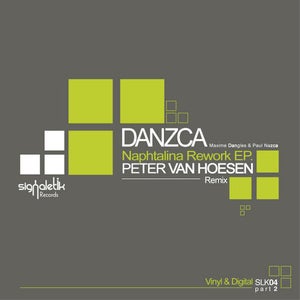 After the success of the track Naphtalina, with a first mention in the Beatport Top 100 for Signaletik Records, the label offers a return on this release with the coming of a "Part 2". The duo Danzca was again requested to provide a new vision of this title. This rework is accompanied by another choice remixer. After the talented Joey Beltram, it is up to Peter Van Hoesen offers us a remix of this track. Peter Van Hoesen, resident at Fuse, the mythical Brussels club, is an artist with a heavy musical history. Active since 1993 in the electronic music scene, he is recognized by all for his multiple talents to produce equally either Techno or Electronica. Founder of the label Time To Express, he also released several productions on other labels such as Lan Muzic, Meakusma or Foton, not to mention the release this year of his debut album Entropic City on his own label.
Enriched by his career path, Peter Van Hoesen tackles this track by giving it a more powerful and dub side. This more German approach creates a resolutely Techno track with a dark atmosphere and a heavy bass. He did not skimp on the effects to break the monotonous side and thereby build a evolutionary track of a little over 7 minutes.
Through their rework, Danzca offers a title with a more hypnotic riff and a dreamier atmosphere without breaking the Techno rhythm as present in the Original Mix. This new version also enhances the contrast between high and low frequencies which also gives more body and presence to this title.
These two new visions are sure to warm up the dancefloors with the arrival of the first wintery evenings. Two approaches, two universes, two visions but the same guaranteed effect!