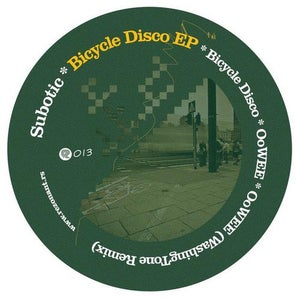 With great pleasure we welcomes Subotic to our Rezonant family.
Before a personal impression of this release we will tell a few words about him.

Milenko Subotic aka Subotic is a DJ and producer based in Serbia, Uzice.
Since his debut on David Duriez' Kill Brique label,this guy has been pretty busy producing and working his way up the scene.
In 2009. he signs release "9000" for Dmom Records which is supported by remixes from well known projects Technasia and Dosem.
After that he came with another successful production for labels such as Wandler, BeatModul, Night Vision, Discos de Lata, Two.Birds, etc.

This time Subotic comes with astonishing release called "Bicycle Disco EP", for our label. When in one release artist mix several styles from retro sounds of house,
to the great implementation of deep dub sounds then for sure that release is not ordinary, or like many others.

This release actually make as speechless, and just what we can say is that "Bicycle Disco" and "OoWEE"
incl. remix from "WashingTone (Nenad Petrovic aka Kobaya)" are brilliant tracks with clear moody style.