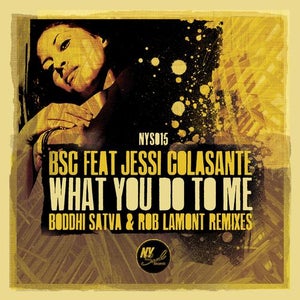 What You Do To Me (Boddhi Satva Remixes)

The talented trio of Claudio Mansur, Alexandre Zee and Edround aka Brazillian Soul Crew (B.S.C) offer up their first release for NY Soul and they have recruited the sultry tones of Jessi Colosante for vocal duties.

As the name suggests B.S.C hail from Brazil, Taubate to be exact a small city 80 miles N.E of Sao Paolo. The guys have had tracks released on various labels including Conya Records, Symple Soul, Nulu, Grooveland, DIN Recordings and they have completed remixes for Mutate Music, Home Recordings, Liberate Rec, MSM, Lunatic Jazz.

What You Do To Me has a jazzy latin vibe with sublime Rhodes and piano keys with a gorgeous acoustic guitar solo. Jessie adds her laidback vocal to complete the track.

The remixes come courtesy of Boddhi Satvha and Rob Lamont.

Boddhi originally hails from the Central African Republic but now resides in Belgium where he put his hand to some glorious productions over the last few years, with tracks released on Vega Records, Yoruba Records, 157 Shelter Records, Seasons Limited, Shack Music, Atal, S.E.E.D Recordings and Boddhis own label Offering Recordings.

Boddhi has also remixed for some of the worlds top labels as well including Yellow Productions, BBE, Yelloworange and many more. His style as you would expect is in an Afro vein with complex beat programming and afrocentric melodies. He is well travelled DJ as well, with gigs all around the world.

In 2012 we will finally see Boddhis album 'Invocation' released on Vega records, a piece of music the house scene has been patiently waiting for.

For Boddhis remix he slams his own imprint on to the release, with squelchy analogue pads, deep chords and Boddhis always on point beat production.

Next up on remix duties is a relative new comer to production and DJing, Rob Lamont. Originally from the USA but now based in Brighton, Rob is a professional multi-instrumentalist, performing in various bands an theatre projects as well as composing for film, stage and his own funk band Joymask.

Robs remix is a down tempo groove with some great funk elements, live bass and melodic keys.