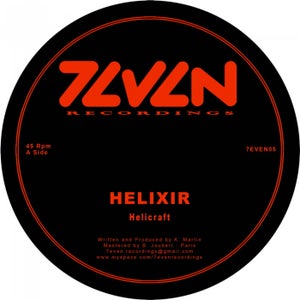 Helixir's back for his second 12'' on 7even Recordings!
After the buzz of his Narcotik Dub / Springz and Wires cut some months back, Helixir do it again with 'Helicraft' and 'Dub 4 P.', blending in his music shaker all kinds of influences, from Dubstep to Techno, Jungle, Breakstep and Dub, produced and executed with immense attention to detail.
'Helicraft' is just a mad track! Wicked beats, Techno loops, Old Skool sounds and tricky mixing potential make it a proper killer cut, as heard in Mary Anne Hobbs' BBC Experimental radio show. The other side of this double A Side, 'Dub 4 P.' is a real smasher, rolling on a broken beat+bass 4/4 riddim bringing the horns to the dancefloor. Killer.