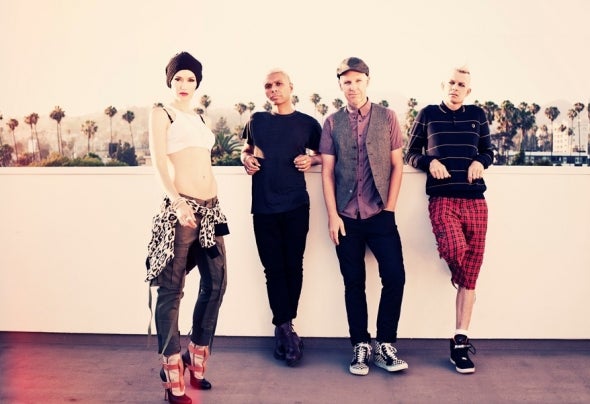 No Doubt has achieved a lot as a band, including releasing several multi-platinum albums (1995’s diamond-certified Tragic Kingdom, 2001’s Rock Steady, and a 2003 singles collection) and a string of chart-topping hits (“Just A Girl,” “Don’t Speak,” “Hey Baby,” “Hella Good,” “Underneat h It All,” and “It ’s My Life”). They’ve launched international sold-out tours, won two Grammy Awards and five MTV Video Music Awards, and were invited to perform for Paul McCartney and the President at the annual Kennedy Center Honors in 2010. Lead singer Gwen Stefani has further emerged as a global music and fashion icon via two best-selling solo albums and her L.A.M.B., Harajuku Lovers and Harajuku Mini clothing lines. Through all the success, the band members have remained grounded by a long-standing friendship that began when Stefani, guitarist Tom Dumont, bassist Tony Kanal, and drummer Adrian Young — bonded by a shared love of ’80s British New Wave and ska bands — began performing together in their hometown of Anaheim, CA. Their nat ural camaraderie, not t o ment ion t he musical alchemy that occurs when these four friends reunite, is palpable throughout the band’s new album Push And Shove — a supercharged blend of ska-rock, dancehall, and elect ronic pop t hat will remind people why No Doubt has maintained its position as one of the most beloved and commercially successful acts of the past 20 years.