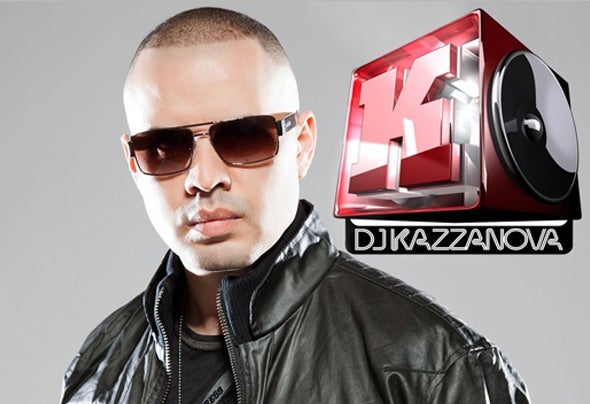 DJ Kazzanova’s impressive resume continues to expand as a sought after studio remixer with remixing credits to his name of top rhymic artists as Shakira’s “Hips Don’t Lie”, Gwen Stefani’s “Rich Girl”, Christina Milian’s “Dip It Low” featuring Voltio, Usher’s “Yeah” featuring Tego Calderon and Alicia Keyes “Karma”, to name a few. He has produced for major record labels, including Interscope, Universal, Def Jam, Cutting Records, and a host of others. In November of 2006, Machete Music (a division of Universal) released “DJ Kazzanova Reggaeton Mixes”, the first of a series of volumes. In November of 2012 he released a remake of the Classic dance anthem, "Boricua Anthem" by C & C Music Factory re-titled "Worldwide Latino Anthem" Ft. Big Ali, G-Zo and The Wepa Man, a track that found its way across all dance floors around the globe.DJ Kazzanova has always had a penchant for innovation as his approach to introduce new mixing styles indicates. On October 2009, X96.3 in New York launched and Kazzanova became one of the first radio on air-personalities to introduce a hybrid of mixes that encompassed different genres of music in a non-traditional way- segueing from EDM to Reggaeton to Hip-Hop without skipping a beat.With a challenging spirit, fiery determination and inexhaustible energy, DJ Kazzanova continues to break barriers and cross boundaries as an ambassador for the hottest new music on the planet. When he’s not on the radio airwaves or working in his studio, Kazzanova can be found spinning for the masses in the biggest clubs , concerts and special events around the world including the U.S., Tokyo, Geneva, London, Toronto, Z urich and many cities in Latin America.Now KAZZANOVA can be heard as an on air personality on the #1 Bi-lingual station, SBS’s 97.9 La Mega in NYC. His multiple duties include mixing dance and Latin music segments and doing on-air live remotes for NYC’s most popular clubs.He is a modern day renaissance man – an entertainer, communicator and a true artist in his own right.