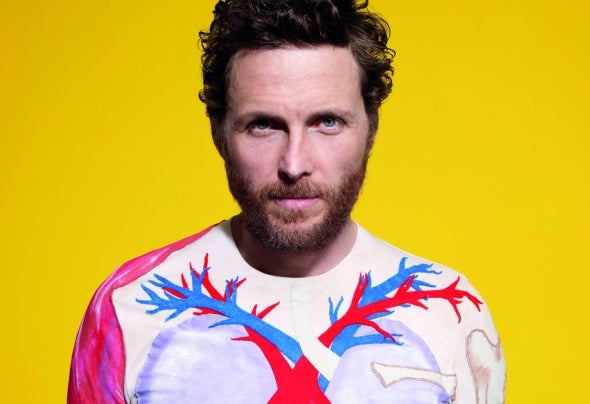 Lorenzo Cherubini – stage name Jovanotti – was born on the 27th September 1966 in Rome. His family originates from Cortona, a small and enchanting village near Arezzo where Lorenzo spent the most part of his childhood and where he has established his home over the past few years. After debuting as a DJ on various local radio stations, he moved to Milan having received an invitation from Claudio Cecchetto from Radio Deejay. His passion for music, discotheques and rapping led to the recording of his first successful singles "Gimme Five" and "E’ Qui La Festa?" which make way for his debut album, "Jovanotti for President". His next album "La Mia Moto" even took him to the Sanremo Song Festival in 1989 with the track entitled "Vasco". After San Remo he experienced life as a VJ on MTV. He was the first Italian to work for the music channel and it also marked his first significant artistic evolution. His desire to grow professionally led him to record an album of songs instead of his "usual" rap tracks. This change continued with following albums, especially from "Lorenzo 1992" on, a masterpiece of fusion between lyrics and music that led to the great chart success achieved with "Ragazzo Fortunato". Tracks such as "Non m’annoio", "Puttane e Spose", “Ho perso la direzione" and "Sai Qual è il Problema" unveiled a new Lorenzo to the public (and to himself). Suddenly the critics’good-natured mud slinging turned to surprised interest. In fact Jovanotti began tobecome interested in politics, in the society in which he lived, and never missed an opportunity to express his own opinions on any issue. "Lorenzo 1994" was yet another step forward on this trail and included his single "Serenata Rap" that became the love song that monopolised radio waves and earned him an invitation to perform on MTV."Lorenzo 1990 - 1995", the first ‘best-of’ collection by Lorenzo also included two brand new tracks, one of which is "L'Ombelico Del Mondo" (the track with which he was in the running at the 1996 American MTV Awards for Best European Video."Lorenzo 1997 - L'Albero" was the first chapter of that new journey. Released at the beginning of the year and preceded by the disarming simplicity of a splendid single entitled "Bella" it surely represents his most consuming artistic contribution as an author.The album "Capo Horn", completed at the beginning of spring 1999 contains 14 tracks and was preceded by the single "Per te", released on May 13th.In July 2001 Lorenzo went to Genoa with Bono and Bob Geldof for the G8 event to meet political representatives of the member states to discuss the Third World’s debt.In 2005 “Buon Sangue” was released and it soon became a great success with five platinum awards. The first single “Tanto” was an interview between the artist and himself, while the video saw Lorenzo and a giant, looking like him, speaking to eachother.Lorenzo then started to work on his new album “Safari”, the Swahili word for travel or walk. The album was recorded between Los Angeles, Cortona, Rio De Janeiro, Hanover and Milan and was released in Italy on 18th January 2008. The first single “Fango” went to radio on December 7th and soon topped the airplay charts. It was a touching ballad featuring Lorenzo’s friend Ben Harper on guitar. The video was shot in the wonderful scenario of the 'Iguazú’ water falls in South America. The second single “A Te” was loved by public and media alike from the very first time it was played on radio. “A Te” is in fact, one of the finest romantic songs to date where Italian music can boast a composition that combines beautiful lyrics with a tender melody, and where the soft sound of the piano develops its strength and force. With ten consecutive weeks at the top of the Italian download chart, “A Te” ranks as the most successful song in the history of this particular chart.In December 2009 Lorenzo Jovanotti announced the release of ‘Oyeah’, his debut album release for the legendary Verve Forecast label in the US. ‘Oyeah’ was recorded in New York City in the summer of 2009 during the 16 concerts Lorenzo held at leading Manhattan and Brooklyn clubs.In 2011, January 25th Jovanotti launched a brand new studio album called “Ora” which was released in Italy, where it became multiplatinum, spawning 5 top ten singles, and simultaneously in Switzerland, Austria, Germany, France and Belgium.The Live album “Lorenzo In Concerto per Jovanotti ed Orchestra”, recorded on 2011, September 3 in Taormina’s Greek Theatre with Roma Sinfonietta band directed by Paolo Buonvino, has been released in March 2012 only for Itunes and Kiosk sales. November 27th, 2012 is the release date of “BACK UP (1987-2012), a full retrospective on Lorenzo’s career, in 3 different formats, featuring 8 unreleased and new tracks.DISCOGRAPHY• JOVANOTTI FOR PRESIDENT /1988• LA MIA MOTO /1989 (My Motorbike)• JOVANOTTI SPECIAL• GIOVANI JOVANOTTI /1990 (Young Jovanotti)• UNA TRIBU CHE BALLA /1991 (A Dancing Tribe) • LORENZO 1992 /1992• LORENZO 1994 /1994 • LORENZO 1999, Capo Horn /1999 (Cape Horn) • LORENZO LIVE - AUTOBIOGRAFIA DI UNA FESTA /2000 (Autobiography of aParty)• IL QUINTO MONDO -/2002 (The Fifth World)• ROMA COLLETTIVO SOLELUNA• JOVA LIVE 2002 (released on digital stores only) • BUON SANGUE – 2005• SAFARI – 2008• OYEAH – 2009• ORA – 2010• LORENZO IN CONCERTO PER JOVANOTTI E ORCHESTRA (LIVE) – 2012• BACKUP (1987-2012) Best of with 8 unreleased tracks• BACKUP REMIXES (1987-2012)• LORENZO 1990/1995 1995 "best of" with 2 new tracks• LORENZO 1997, L’Albero /1997 (The Tree)