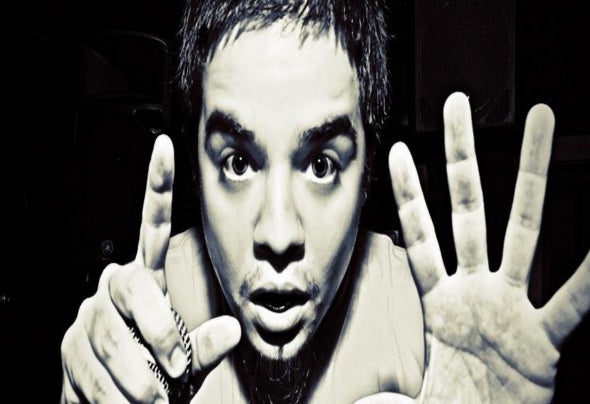 George "The Infinite" is one of the shining stars in the underground music scene. He's been linked to big names and labels all throughout his electronic music career getting his start as a resident Dj for the Basshead music night at the legendary Laundry Bar on Miami Beach. More recently he has been linked to the Smog Records Camp pumping out a remix of Noah D ft. The Grouch's "Just Right" as well as cranking out remixes for Denver based "Velcro City Records" with his partners Karina Skye, Klassic and platinum selling artist Lex One of Wizzard Sleeve.His first love aka drum and bass music has been supported by A list Dj's and producers all across the globe. His first major break came in the form of a 12" vinyl drum and bass remix of Lupe Fiasco's "Superstar" along side legendary producer Dj Silver (of Sonic & Silver Fame)which went on to be a big hit on Fabio and Grooveriders now defunct "BBC 1xtra" show. Dj support for the record included Dj Marky, High Contrast, Fabio,Grooverider and many other top Dj's in the Drum and Bass scene.Since then he's gone on to release several different releases and remixes whether on his own Digital Felon imprint or via music labels like "Kill Inc" and "Sublife"and his music has been heavily supported by dj's like Ak1200, Dieselboy,6blocc,Dj Strife,Dj ICue,Soul Slinger,LM1 and more. Currently he is working on his debut on Big Riddim Recordings run by the legendary Ak1200.In the world of hip hop Mr. Infinite gets just as much love. His first single produced along side super producer "Numonics" took both scenes by storm ending up on the highly acclaimed "A3c HipHop Music Compilation" a long side fellow rappers "A$ap Rocky,Danny Brown,Freeway,Smoke Dza and many other top hip hop artists.As of late he has been hard at work producing the latest single for Brian Breach featuring Mickey Factz entitled "Closer" due early spring of 2013 and also just finished up the lead single for Miami super emcee "Sevenstar" for his "Wolves In the Bronx" Album and a remix project with fellow Miami Emcees' "Serum & Manifesto"We can't forget about his work with fellow vocalist Karina Skye and they're hit singles "The Truth" “DnB Chemistry” and “Feels Good” which has brought them international success and a strong fan base which has led them to headline shows and stages taking them as far as Earthdance and even Brazil.Opening up for everyone from Skream to Andy C to Inspectah Deck it's pretty crazy how this guy is still an underground phenonemon but we think that's just what "The Infinite" wants.You can see him live every first Monday of the month doing his drum and bass thing in Downtown Ft. Lauderdale at his highly acclaimed "Digital:Insight" party which is going on it's 6th year which is a pretty hard thing to do in the super top 40 land of south Florida.