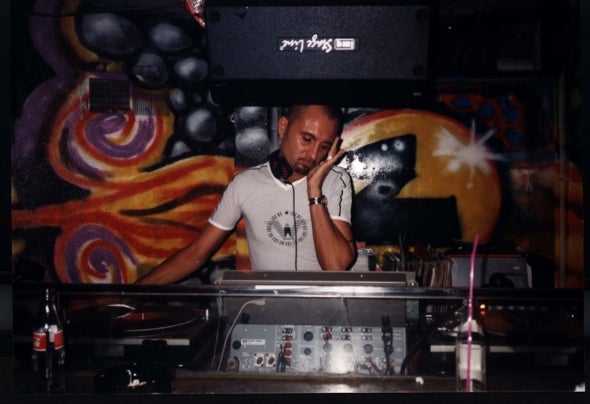 Dj Max La Menace is one of the pioneers of electronic dance-music in Belgium, as he started to Dj way back in the eighties in the first undeground clubs in Antwerp like Club Domino & Avant-Garde Club Jay's in Antwerp where he played the first wave of electronic dance-music at the high-times of electronic New-Wave & electro . AS he followed the evolution of Dance- Music from closeby, he swiftly followed in the early nineties towards the upcoming first wave of House- music & later on Trance, Techno & Psychedlic Goa Trance.Max played an important role in the elctronic dance- music scene in Belgium as he became at the age of 21 already the manager/owner of Avant-garde Club Jays in Antwerp & later on followed many other clubs ( The Project (Stabroek) , Club Revue (Mechelen) , Club Zazou (Lier), ... ) & famous party organisations as Technodelia, Goadelia,Lazer Club (from the famous illegal Belgian House-radio station Lazer) and organised in cooperation with the famous Belgian House magazine 'OUT SOON' the 'Belgian Techno Dj Contest' and the radio programs 'Out Soon ..on the air' (on Channel X) and ''The Visions of Trance' (Lazer) togethjer with Dj The Fly (founder of Bonzai records)....and played in Belgium & abroad on hundreds of raves & party'sIn 1997 he started , together with mostly ex-Bonzai records guys as Axel Stephenson (Jones & Stephenson (The First Rebirth), Howard Levine , Dj Ghost,...the ASG-Group (Alaska Swimming-Gear) which continues to grow the last years and is now in its' 15th year of existence.(2012)The ASG-Group is an independent electronic-music holding & parent company, & publisher of more than 20 independent dance-music labels. The ASG policy is based on the new evolutions in the music-industry where different labels work together in one holding company , which serves as the main vehicle, for publishing, production, legal-work, distribution, promotion, etc... for electronic dance-music.ASG is always looking forward & adapting to the new digital age threats & opportunities in the music- industry.Working more in the background nowadays Max is still active as a sporadic remixer & mastering- soundengineer besides of the coordinative work of the ASG-Group.