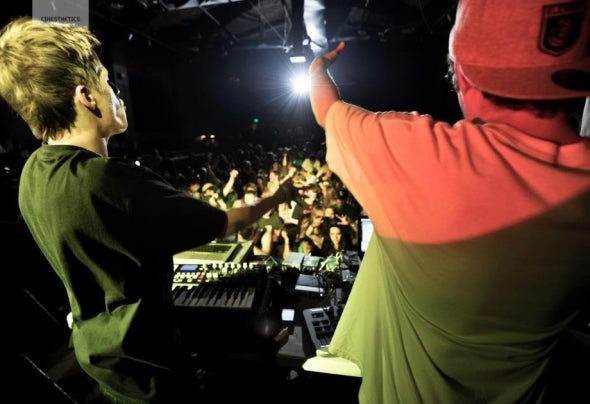 Crushendo, comprised of Cody Yozipovic (Frequent C) and Julian Garland (The Candyman) marks the evolution of their previous project aliased under Slim Thugz. Impeccably well-orchestrated melodies are painstakingly layered on top of some of the freshest hip-hop inspired beats to come out of such a diverse music scene, and the result is utterly electrifying. A breath of fresh air for the burgeoning new era of electronic music, Crushendo always strives for innovation, constantly seeking to create and utilize sounds in ways that completely evade all attempts at categorization.With extremely eclectic live performances often featuring guest accompaniment on saxophone or drums, this duo knows no boundaries and can play effortless alongside the likes of extremely diverse acts such as Zeds Dead, Lloyd Banks, Big Gigantic, Two Fresh, Eoto, Mimosa, and Elliot Lipp. Having played at festivals and headlined several sold-out shows across Colorado during their first year together, Crushendo is fully geared and ready to take their impressive production to the next level in 2012 with a slew of national dates and festivals soon to be announced. Their debut EP "Drop Logic" finished at #1 for February's Top Releases on Addictech.com and is currently available on Beatport.com at https://www.beatport.com/release/drop-logic/879506.