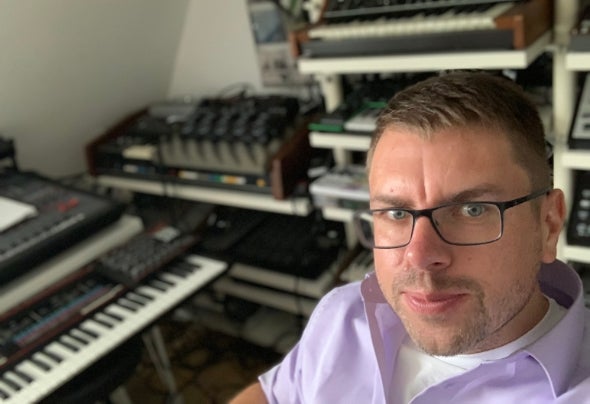 Christian Quast found his way to electronic music in the young age of thirteen and back the progress of his music always was one of his major priorities. Additionally he then already experimented with music software on Commodore C-64 and later the good old Amiga 500. Caused by lots of long nights in Hamburgs Clubs, especially the UNIT, his affection to technoid sounds developed more and more and resulted 1991 in first steps to an own music studio. His style evolved to a mixture of experimental and modern sounds, whereby succeeds surprisingly in combining harder sounds with such melodies, so that the result fascinates a various kind of people also those among with more sensitive ears! The first live acts came 1995 with the project Aural Seduction and later with Propan. At the same time, Christian was moderator at his German Radio Show RMW (Future Sound of Hamburg Music Works), a broadcasting wich run once a month in Hamburg as a popular contrast to commercial programms and to spread the news of the young electronic music szene (1992-1997). Lots of inspiring impressions he may have gotten from their numerous guests: e.g.Azzido da Bass., Tobias Lampe, Stefan Brügesch or Boris Dlugosch. At the same time Christian released his first E.p.- Caustic Expulsion vs. Propan at Maelstroem Rec., a German electronic lo-fi Label, in1997. There came a time when the broadcast show seemed to be positioned too far away from the generall audience and theTrance -Hype going on in Hamburg, so it was abandoned. Christian Quast had to pause his music interests anyway due to job-related reasons. 2001 fortunately, Christian decided to give room to his own musical visions again and hit off with a solo project. During this time he enthralled with very energetic live acts wich left hardly anybody calm on their seats. From his early years with electronic music on, he always used music as an expressionform for himself, without any orientation on mainstream and is one of the few who manage to fascinate with this instead of becoming just wacky! Anyway, 2001 also followed the second release under self distribution and his Radio Show was resurrected. After 1,5 Years Christian stopped producing the Radio Show and started the together with Kai Schöning the Webcommunity 'djznet.de'. - but he had to stop his work for this community. On the production side, Christian uses both analog and digital synthesizers and does not want to miss the feeling he has when turning on his analog machines, as well as he loves the infinite possibilities new digital media comes with. Christian participated in projects like Praefutura, Open Source and Yatsuo Motoki feat. Paul Sanchez Jun. Beneath Dienstag with his jazzy saxophon sounds, Platte 19 with their percussionbeats and the great voice of Shirin In 2005 it was time again to get some new Impressions and new Vibes for a fresh and powerful Future. In 2006 he started his own company 'futureaudio.de' - Music Production - in 2007 he started his own Record Label called : 'Salto-Recordings' and finally [modulator-recordings] a digital only label. Quast released so far on different labels like : Safari Electronique, Glückskind Schallplatten, IronboxMusic, Kickboxer, BPITCH Control and Zyx Music. Be prepeared for new Releases and fresh Tunes coming up from Christian Quast.