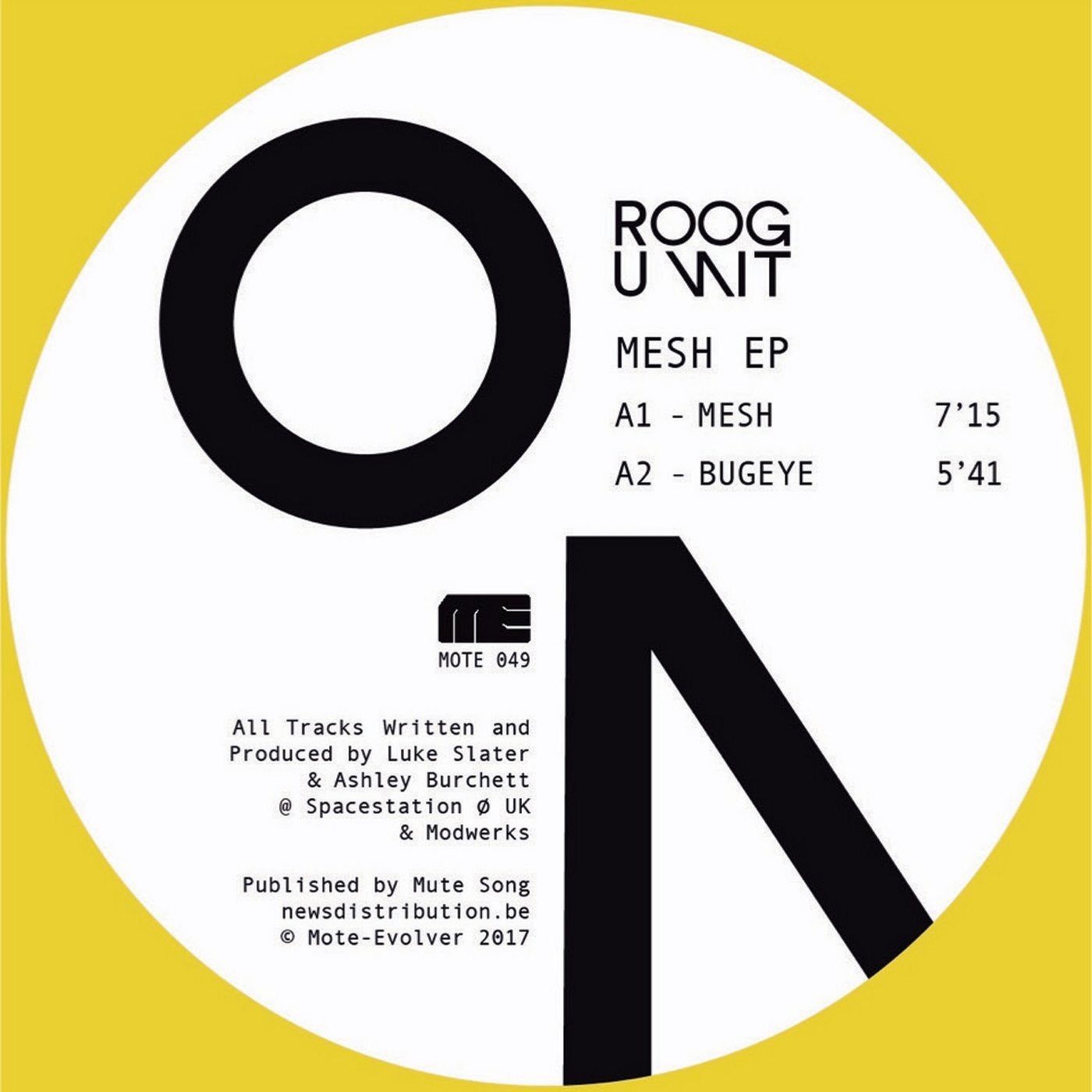 Roog Unit is the new production duo fusing together the talents of Luke Slater and ? [Phase] a.k.a. Ashley Burchett, the music being the result of many months of discourse and growing connection. They have already joined forces in the recent past: ? [Phase] contributed a striking remix of the Planetary Assault Systems classic "Dungeon" for the radical reassessment program "Planetary Funk: 22 Light Years," and the two shared DJ duties during last year's "22 Light Years" tour.

The apt title of the debut EP for Mote Evolver, "Mesh," suggests a locked grid or set of axes on top of which all sorts of creative possibilities can be sketched out, and it provides a perfect descriptive metaphor for the interaction between these two skillful heads: like carefully interwoven strands, neither half of the duo dominates the proceedings and each individual's contribution strengthens the effect of the other's.

The self-titled leadoff track on "Mesh" is a bracing bombardment of the senses, pulling out all the stops in order to get ever closer to a white-hot core of intensity. This journey to the heart of the sun moves along at a rapid pace, but also with a sense of patience, as new sound elements fade in slowly and surely. Chugging bass sequences, metallic flutters and sparkling high-register arpeggiation all make this into a piece of contained chaos that will engage veteran listeners and certainly teach novices a thing or two.

Before the listener has fully caught his or her breath, "Bugeye" follows suit and proves that the winning formula of the previous track is no one-off affair. A characteristically high-impact percussive track forms the base from which Burchett and Slater implement their plans for layering sonic architecture. Here their experience and determination truly differentiate them from the pack - where others might pile on sounds into an indistinct and fatiguing audio mush, this pair overlaps numerous different tone colors without causing any of them to lose their individual character.

The flipside, "The Chains," is a quintessential late night / early dawn number that leads listeners down subterranean corridors lined with beams of luminescent light and populated by smoke-shrouded men of mystery. On this cut, eerie shivering sonorities float in with all the classic drama of sustained Hammond organ chords; a bed of sound on top of which a cool vocal recitation encourages listeners that everything will be "all right" - although the tension between this laidback narration and the demanding straight-ahead trajectory of the music will allow listeners to make up their own minds on that score.

The full dose of "Mesh" shows two producers clearly at their most focused and precise. Like their best work to date, it will get fans' active imaginations churning - and leave them wondering what this collaboration has in store for the near future.