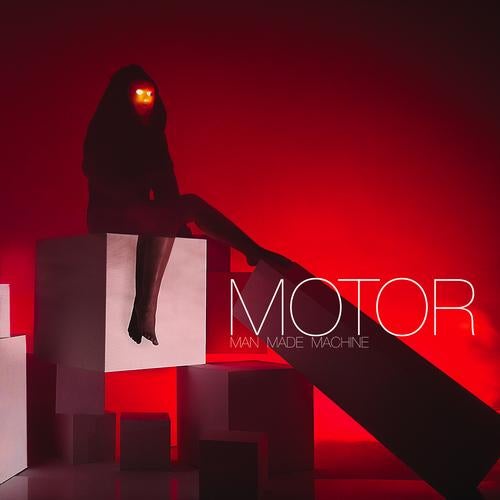 There are several ways to try to sum up the history of MOTOR. Chronologically listing all of the releases, significant events, enthusiastic critics and superlative comments, awards won and goals achieved in a comparatively short period of time would be one of them. It would certainly be a quite impressive list, but it would not fully pay justice to the phenomenon of MOTOR, as this phenomenon is clearly more than just the sum of its parts. Sometimes less is more, and that is why this brief history more than anything focuses on some of the milestones in the rise of MOTOR, as well as some seemingly random anecdotes, which at the end of the day impressively stand for the very essence of this extraordinary act. But first of all, the good news: MOTOR is about to release another album, which opens a new chapter in the history of the band. After completing three massively successful and critically acclaimed techno albums, Bryan Black and Oly Grasset, who together form the duo MOTOR, have shifted gears and recorded a song-based vocal album by the name of Man Made Machine. The album was conceived during their World tour with Depeche Mode in 2009 when Dave Gahan fell ill and the band found themselves in a hotel in Berlin with time on their hands. It features the vocalists Martin L. Gore (Depeche Mode), Gary Numan, Billie Ray Martin (S' Express, Electribe 101) and Motown's rising new star Reni Lane. Just recently, when MOTOR secretly played the first single from the upcoming album (also titled Man Made Machine) on a BBC radio broadcast, it got over 10.000 views within hours of being ripped and broadcasted on youtube. The reactions from Depeche Mode and MOTOR fans are absolutely ecstatic. One online comment, which has often been quoted and agreed to, is that Man Made Machine sounds like the modern version of the Depeche Mode track Personal Jesus - a royal honour for the guys from MOTOR. Sometimes music critics are still having difficult times grasping or quantifying just exactly how significant MOTOR´s contribution to modern music actually was and is, but there is hope that the upcoming album Man Made Machine will add to a deeper understanding of the importance of this unique act. It is no coincidence that the album features some of the key figures in the evolution of electronic music. MOTOR have played as the main support act on sold out tours for Gary Numan, Nitzer Ebb and Depeche Mode and have been considered one of their best received support acts. They have performed on the main stages of all the top festivals with acts like Daft Punk, Kraftwerk, Soulwax, Justice, etc. They are known for having one of the most explosive and entertaining live shows in dance music. As an almost logical consequence of their uncompromising attitude and trend-setting style, the fashion world has also taken notice of this powerful act. Raf Simons uses MOTOR music on his website and in his catwalk shows and Rick Owens used the MOTOR track "Ice" for the presentation of his 2012 Menswear collection. It is interesting that a fashion designer who´s look has been described as "glamour-meets-grunge" and who says about his own work that "It's about an elegance tinged with a bit of the barbaric, " chose the music of MOTOR as soundtrack for his latest fashion show. Other than that, MOTORs music has been featured on various HBO and Showtime TV programs, in films and in several Playstation and Nintendo video games. Their impressive list of remixes includes Precious by Depeche Mode. In Mixmag 2006, Depeche Mode actually listed this one as their favourite DM remix of all time. This should in itself be enough to create some pleasant anticipation of the upcoming album and tour from these unconventional techno pioneers. Just one more remarkable aspect regarding the long-player Man Made Machine is the fact that it is going to be released on a new sub-division of Chris Liebing´s CLR (Create Learn Realize) label, one of the leading German techno imprints. The branch is called CLRX and is out to explore new sonic universes of a musically more complex, song-structured nature. The founding of CLRX shall help people to distinguish easily between the classic CLR sound and the slightly different one of this new venture. Bryan Black just released his first, tremendously successful and critically acclaimed solo EP (Black Asteroid - Engine 1) on CLR. After working together so successfully on this project, the label and artist started talking about also working together on the release of the new MOTOR album and finally came to the conclusion to go for it. Chris Liebing had always been inspired by the out of the ordinary techno approach of MOTOR and shares many of the same influences. He and the label team are highly thrilled about this collaboration. So please watch out for Man Made Machine, the fourth album of MOTOR, to be released on CLR X of March the 30th of 2012. The accompanying video for the first single Man Made Machine is a spectacle in itself and is the perfect introduction to the dark and mysterious world featured on the breath-taking new LP, Man Made Machine.