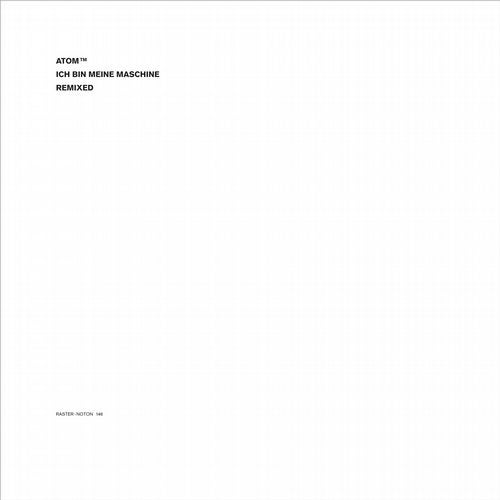 to underline this tryptic statement (and to demonstrate the diversity) of one of atomTMs compositions that appeared on his 2013 HD album, raster- noton now releases a vinyl ep featuring remixes by boys noize, function and atomTM himself. ich bin meine maschine, in an elaborate manner, illustrates uwe schmidt s main musical concern - the exploration of electronics in pop music. inspired by a statement of the cybernetician heinz von foerster, atomTM constructed/generated a message that is playing around with a widely-cited kraftwerk quotation, turning ich bin eine maschine into ich bin meine maschine (i am my machine). besides the album version of ich bin meine machine, the ep features some dominantly techno influenced versions that perfectly connect the pop attitude of HD with dancefloor functionality. the boys noize remix shows off alexander ridha s deft skills for translating atomTM s futuristic pop into his own rough and driving electronic language. on the other hand, atomTMs linear remix breaks down the original structure of the song and turns it into a reduced and much straighter, forward looking composition. function - one of technos true underground heroes - provides a remix that is breathing the air of solid and hypnotic club music, in which just the essential elements are streamlined and condensed into perfection.

all 3 remixers adapt the track to their particular universe. by doing so, they prepare the 12 vinyl for its final destination the club.

r-n146 will be available as standard vinyl and as heavy vinyl limited edition.