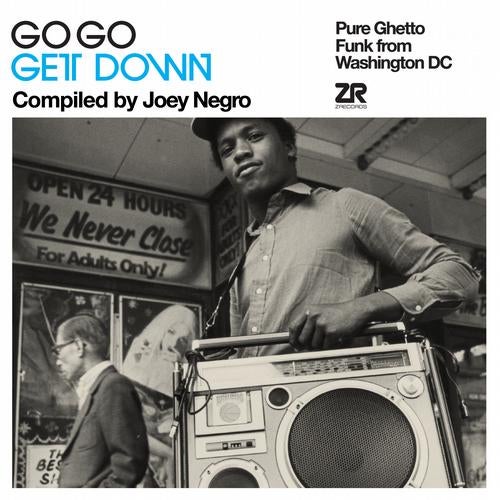 GoGo Get Down is the latest compilation from Dave Lee aka Joey Negro to be released on the Z Records label. A mammoth and rare retrospective of Washington DCs spectrum of Ghetto Funk, this collection showcases the visionary side of the GoGo scene while bringing its key artists the modern exposure they deserve.

Joey Negro gives us an insight into the vintage rhythms and chiming cowbells as well as the dedicated soul screams that pierce through the retro soul rhythm that gives GoGo its distinctive sound.

As someone who has more or less made a career out of being a music lover, its a great buzz to put together and release albums of these semiforgotten genres like GoGo or our recent Brit Funk compilation. Many of the tracks included on this album are ultra obscure local-only releases which Ive picked over my years of digging. Seeing a project like this through from the initial concept to the final product is quite a task at Z HQ and at points you cant help but wish youd never started the damn thing...

However, all of the graft is forgotten once the finished release arrives and youre listening to those bumpy DC grooves in all their remastered glory

Developed first by jazz guitarist and singer Chuck Brown (whose group the Soul Searchers were at the top of D.C.s scene), GoGo is characterized by its laidback but dynamic funk rhythms accented with loose conga beats, freaky keyboard leads, and strong, emotional brass arrangements. Its also been a staple of the midAtlantic scene for the past 35 years.

From remarkably fullon, joyous grooves this unique collection aims to celebrate the potent yet smooth GoGo sound, with its well represented roots flirting through a framework of lightly layered keys and horns. GoGo Get Down is a high quality and deep snapshot of this highly regional Washington D.C. brand of funk featuring delights from the likes of the Godfather of GoGo, Chuck Brown, Trouble Funk, Rare Essence, Experience Unlimited, and many more forgotten classics

I started buying Funk and Soul records from Soul Bowl in Norfolk in about 1980, John Anderson the owner had a big barn full to the rafters with vinyl, he would travel the breadth of the States - bringing back container loads of rare music. So many in fact it was a daunting prospect to know where to start in that crazy Barn... endless shelves many of which you could not even get at as there were so many piles of records stacked on the floor. It was here that I first discovered Chuck Brown & the Soul Searchers. Ashleys Roach Clip was the sort of track title that would grab my attention? According to John it was shite from Washington DC from that album I hunted out many more records, slowly putting the story together and thus finding GoGo. I even went on a pilgrimage to Washington in about 1986 on a record-buying trip Had to ship em back and pay a stupid amount of tax but those tunes still rock and those toms will always roll Jon More (Coldcut), March 2012

GoGo Get Down is a must for have any serious soulful record collector Jazzie B, March 2012

These GoGo tracks certainly brought a smile to my face. I have a monthly conversation with Ross Allen regarding the GoGo revival which we both think will happen. Wishful thinking! So it's great you guys are doing a comp of GoGo killers which in the scheme of things could prove us both wrong. A fantastic selection and believe me I shall be throwing down very hard! Put your hands up for D.C.! Ashley Beedle

Go Go Get Down Compiled By Joey Negro