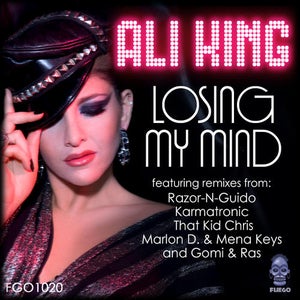 Check out the mega-remixes from the debut single Losing My Mind by Ali King- already blazing up the Billboard charts!!!

First up are the Razor-N-Guido Club mix followed by the Karmatronic Club mix- both mixes take you on a pure Electro trip. This mixes are commercial in their appeal without giving up any of the underground swagger this track demands. Alis vocals are clear and strong and the song is a real standout as well. The hooks are large, the vocals are large and these mixes provide the perfect background to showcase both those elements in a very DJ friendly way.

Next up That Kid Chris takes you squarely into the Deep Dark Delicious world of the After Hours Nightclub. His mix is Sexy with a pounding drum track. He uses almost Industrial Dissident sounding synth lines and Alis vocals here are more exposed but ethereal in nature. He is pulling you down into a world you are helpless not to go to.

Marlon D. & Mena Keys gives you a mix that is deep, soulful and its the kind of classic House Production that makes you think of a time when things were less complicated and music had to be groovy first. Marlon and Mena didnt forget this is a Dance mix and the funky bassline and powerful Dance Track invites you onto the floor without beating you up over the head about it. For those of us that spin to a more Sophisticated crowd this mix will rock your world!

Gomi & Ras takes you a a Tribal Trip with Electro synth stabs the would sound very much at home at your local After Hours Gay Big Room and will probably be the Mix Du Jour for the Billboard Reporters!

That Kid Chris Remix:
Produced and mixed by Chris Staropoli