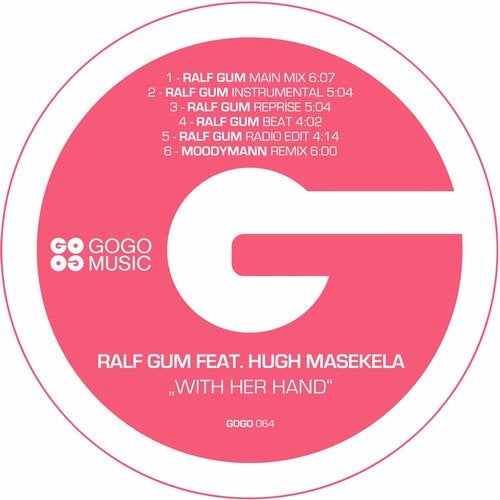 GOGO Music takes pride in presenting the third single from Ralf GUM's highly acclaimed album, 'In My City', which was selected as the Best Dance Album 2014 by iTunes. 'With Her Hand' features the iconic South African jazz musician Hugh Masekela and brings under Ralf's leading together more legendary artists in one recording, as it was written together with Monique Bingham who sings as well the backgrounds vocals and produced together with Phil Kullmann aka Raw Artistic Soul. The release includes a Moodymann remix, delivered in his very own Detroit style.
'With Her Hand', the 3rd single taken from Ralf GUM's album 'In My City', is a deep musical piece talking about a topic being close to the artists' hearts. Lyrically inspired by the reconciliation of Winnie Mandela with Nelson shortly before his sad passing in 2013, this tune is truly a song, which is fitting GOGO Music's mission to deliver real meaningful dance music.
'In My City' became one of the most celebrated albums of 2014 and was selected as Best Dance Album of 2014 by iTunes South Africa, while international media celebrated it extensively. IDM Mag (ZA) said that ''In My City' has almost instantly been dubbed as a classic', DMC World (UK) acknowledged that 'the German superstar brings beautiful house music to our world',

With Her Hand (feat. Hugh Masekela)